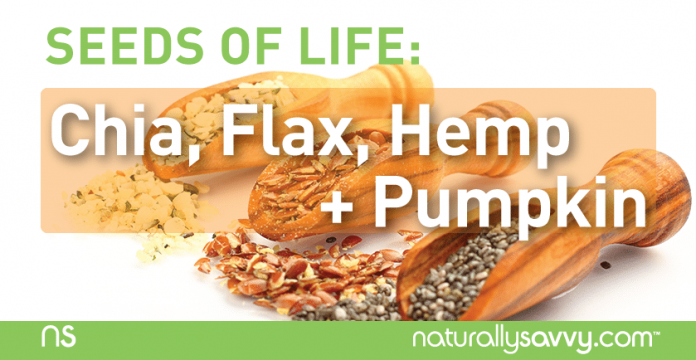 Seeds are nature's way of perpetuating the life of plants. They are also a crucial food source for birds, squirrels, livestock and other animals, especially during the long winters. For humans, edible seeds provide a delicious nutrient-packed punch to meals and snacks, and are the source of most of our cooking oils, as well as some spices and beverages.

Seeds are quite high in calories because of their natural oils, but don't let that dissuade you from enjoying them. Their nutritional value is worth every calorie. A few interesting edible seeds that top the nutrient charts are chia, flax, hemp and pumpkin seeds.

While most of us remember the "Ch-ch-chia Pet" as an 80's gimmick, the ancient plant is actually regarded as a superfood with many clinically proven health benefits. Chia (Salvia hispanica), a plant belonging to the mint family, was so highly recognized by the Aztecs that it was often used as currency. The powerful seeds, referred to as "running food", sustained Aztec runners, hunters, traders and warriors on long expeditions, often as their only source of nourishment.

Today, experts suggest that chia is one of the most nutritionally complete foods found in nature. In addition to being an excellent fiber source (mostly insoluble, which creates bulk for stool), chia is a rich plant-based source of Omega-3 fatty acids, consists of about 20 percent protein, and contains high levels of antioxidants, calcium, magnesium and iron.

Read More: The Most Antioxidant-rich Foods

Research has shown that chia has enormous potential to prevent and treat cardiovascular disease and Type 2 Diabetes. It can lower blood sugar (glucose) after a meal, reduce inflammation (C-Reactive Protein) and blood pressure, and it is a natural blood thinner. Since chia can absorb several times its weight in water, it helps the body maintain hydration – an important advantage to athletes and to those living in hot climates.

Gluten-free chia seed can be added – whole or ground – to a wide range of foods including cereals, breads and bakery products, yogurt, desserts, pasta, and even soups and mayonnaise.

Flax has been cultivated for centuries and has been celebrated for its usefulness all over the world. Hippocrates wrote about using flax for the relief of abdominal pains, and the French Emperor Charlemagne favored flax seed so much that he passed laws requiring its consumption!

The main health benefits of flax seed are due to its rich content of Alpha-Linolenic Acid (ALA), dietary fiber, and lignans. The essential fatty acid, ALA is a powerful anti-inflammatory, decreasing the production of agents that promote inflammation and lowering blood levels of C-Reactive Protein (CRP), a biomarker of inflammation. Through the actions of the ALA and lignans, flax has been shown to block tumor growth in animals and may help reduce cancer risk in humans. Lignans are phytoestrogens, plant compounds that have estrogen-like effects and antioxidant properties. Phytoestrogens help to stabilize hormonal levels, reducing the symptoms of PMS and menopause, and potentially reducing the risk of developing breast and prostate cancer.

Read More: Natural Relief From the Symptoms of Perimenopause

The fiber in flax seed promotes healthy bowel function. One tablespoon of whole flax seed contains as much fiber as half a cup of cooked oat bran. Flax's soluble fibers can lower blood cholesterol levels, helping reduce the risk of heart attack and stroke. Ground flax seed provides more nutritional benefits than does the whole seed. Grind the seeds at home using a coffee grinder or blender, and add them to cereals, baked goods, smoothies, and yogurt. Store dry, whole flax seed in an air-tight container at room temperature for up to a year. Ground flax seed should be refrigerated, also in an air-tight container. Properly stored, it will keep for up to three months.

Hemp has been an important resource and source of nutrition for thousands of years. While Cannabis sativa L. and other non-drug varieties of Cannabis, commonly known as hemp, have not been cultivated for use much in recent years, interest in the versatile plant has been restored world-wide.

Studies have identified hemp seed as a functional food and important food resource. Technically a nut, hemp seed contains over 30% fat and about 25% protein, with considerable amounts of dietary fiber and other nutrients. Nutritionally, hemp seed – or hemp heart – is best known for its polyunsaturated fatty acids (PUFAs). It's an exceptionally rich source of the essential fatty acids linoleic acid (omega-6) and alpha-linolenic acid (ALA), and a rare source of gamma-linolenic acid (GLA) and stearidonic acid. The two main proteins in hemp seed are edestin and albumin. Both of these high-quality proteins are easily digested and contain nutritionally-significant amounts of all essential amino acids, arginine in particular.

Some of the known health benefits of hemp include increased energy, improved metabolism and immunity, reduced food cravings, and it can help lower blood pressure. Hemp hearts also contain plant sterols that have been shown to reduce cholesterol. In the U.S., hemp seeds are used to produce food, nutraceuticals, and body care products. Natural Product stores and supermarkets sell a variety of hemp-based foods, including hemp hearts, hemp bars, hemp protein shakes, hemp milk (non-dairy beverage), and cereal made with hemp.

Pumpkin seeds have 373 calories per half cup. They are a good source of minerals, including zinc, iron, magnesium, phosphorus, potassium, copper, and manganese, as well as protein and fiber. Only one ounce provides about 7 grams of protein.

Pumpkin seed oil is rich in essential fatty acids (EFAs). EFAs have many benefits, among them the maintenance of healthy blood vessels and nerves, and all tissues, including the skin. The oil is also rich in phytosterols, plant-based fatty acids that are similar enough to cholesterol that they can replace it in the human body, contributing to the reduction of blood cholesterol levels.

Pumpkin seeds have long been associated with a healthy prostate. The protective compounds present within the seed of the pumpkin, which include zinc and phytosterols, may help to shrink an enlarged prostate. For prevention, eat a handful (about 1 ounce) of raw pumpkin seeds three times a week.

Eating seeds raw is always preferred as roasting them deteriorates or destroys many of the nutrients. Add whole seeds to hot or cold cereals, baked goods (breads and cookies), salads, steamed vegetables, or grind them up to add to burgers, chili and casseroles.