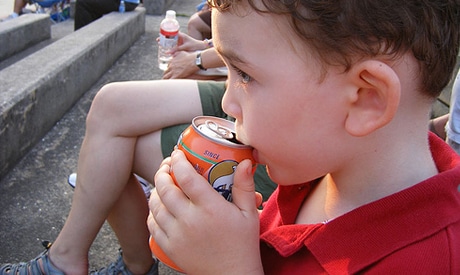 The dangers of soft drink consumption are becoming more and more well known, as studies have been analyzing the excess sugar, calories, and artificial flavors (not to mention The Scary Seven™!) ingredients and the harmful effects it can have on an individual's health. Another issue regarding these soft drinks that is always discussed is the way some of these drinks are often marketed towards children. While we can begin to understand that yes, excess calories and sugar can have a negative impact on the physical health of children, a new study has indicated that these dangerous ingredients can also have a dramatic and negative effect on behavior, namely aggression in children.

A recent study, published in the Journal of Pediatrics, found that “drinking several servings of soda a day is associated with behavior problems such as aggression,” reports the CBC.

Researchers analyzed 2,929 children in the United States and discovered that 43% of parents stated that their child had at least one soft drink a day and 4% had four or more servings daily.

Shakira Suglia of Columbia University’s Mailman School of Public Health in New York and her co-authors stated that “In this large sample of five-year-old urban U.S. children, we found strong and consistent relationships between soda consumption and a range of problem behaviors, consistent with the findings of previous studies in adolescents.”

The study found that “children who consumed four or more servings of soda per day were more than twice as likely to destroy things belonging to others, get into fights and physically attack people compared with children who drank no soda.”

While the researchers didn’t have specific information on the type of soda consumed, caffeine and sugar are both potential triggers, according to Suglia. She added that “caffeine is associated with impulsivity in children and adolescents but the scientific evidence for sugar is mixed.”

What should also be noted, according to Nutrition Professor Katherine Gray-Donald of McGill University is that “when we look at simply three groups of children eating low, medium and higher levels of sugar, you look at your nutrient intake, as the sugar goes up, the amount of many other nutrients just declines quite regularly.”

It should also be noted that there are other variables to consider, including the home environment and parenting practices. Read more about soft drinks and depression