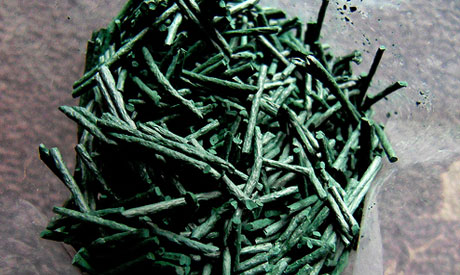 In what's becoming one of the more well known superfoods, spirulina is a versatile food that can be used in your meals and snacks in a variety of ways. Some of the benefits of adding spirulina to your diet include its ability to inhibit the growth of breast cancer cells, and the fact that it could also improve your academic performance. However, a new study has indicated that spirulina has another positive effect: it can help regulate blood sugar levels in type 2 diabetics.

The study, which was reported by Nutra Ingredients found that "over a two-month period, type 2 diabetes mellitus sufferers developed improved blood sugar and lipid profiles after taking the dietary supplement."

With regards to the specifics of the study, researchers wrote that "a study group of 25 patients were randomly assigned 2g of spirulina each day over the period of the research. The control and study groups each had a similar medical and nutritional profiles." The report went on to conclude that "the research found that those taking the spirulina supplements showed lower fasting blood glucose concentrations and reduced glycolsylated hemoglobin (HbA1c) levels than those on a placebo."

Panam Parikh of the MS University's Department of Foods and Nutrition concluded the report by stating that "these findings suggest the beneficial effect of spirulina supplementation in controlling blood glucose levels and improving the lipid profile of subjects with type 2 diabetes mellitus."