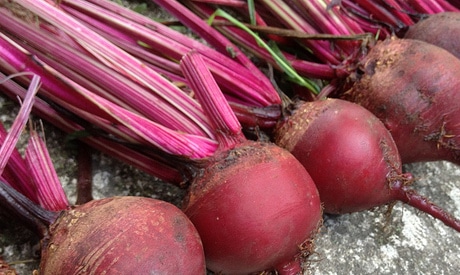 Sweet, nutritious, and edible from root to leaf, this is the perfect time of year to include beets and all their goodness into your weekly meal plan.

Beets have their wild “roots” in North Africa, although they grow abundantly in many parts of North America and Europe in modern times. Their natural sweetness made them a prized alternate source of sugar in the nineteenth century. Beets were declared as the “primary source of sugar” by Napoleon when sugarcane was no longer widely available. Even today, dried and dehydrated beetroot can be found as a sugar alternative. Historically, the Romans brought beets to the rest of the world for agricultural use, originally as a source of food for animals, then gradually becoming food for humans.

As a member of the Chenopodiaceae family (along with Swiss chard, spinach, and quinoa-truly!), the beet (Beta vulgaris) is unique in that its leaves and root can be (and should be) eaten. Its deep purplish-red hue and hearty volume provides aesthetic richness to a plate in addition to its healthful properties. Beets can also be a gold-yellow color, providing slightly different nutrients. These rich red and yellow colors can be attributed to powerful phytonutrients called betalains (specifically more betacyanin in red beets and betaxanthins in yellow beets).Read more about phytonutrients

Some people may find preparing beets an intimidating procedure because of how easily hands can become stained, but a little bit of lemon juice can often eliminate that. Also, when buying and storing beets with their greens attached, they are usually only good for 3-5 days; however, when their greens are cut they can last between two to four weeks. This is because the greens draw moisture away from the root.

The health benefits of beets are plentiful! While both the greens and root are extremely nourishing, the greens have higher concentrations of calcium, iron and vitamins A and C. Beets are also a great source of manganese and folate. In addition to being delicious and versatile, some of the healthful properties of beets include:

Ultimately, beets benefit the lungs, heart, liver, colon, and stomach, and their combination of highly beneficial compounds allows for an optimally run body.

How to Use Beets

Many people may think borscht as soon as they hear beets in autumn-so soothing and warming on a cold night. It’s also no secret that beets are a fantastic component to a juicing regime or as pickles.

What some people know they can do but may not practice as often is eating the leaves and stems as part of a nourishing diet. They make a wonderful addition to soups, but they can also be added to a sautéed vegetable dish or can be the main greens of a salad. Raw, the roots can be grated into a salad, too. Beets in their entirety can be added to juices and may have an earthy taste that screams “healthy,” but they’re also delicious in the right combinations (juiced with some mint, apple, and carrot).

It is also possible to buy beet crystals that have been dehydrated for additions to salads or as toppings to sweets. Some people may even want to sprinkle it on non-GMO popcorn.Read more about avoiding GMOs

When washing and preparing beets, they should be washed under cold, running water. Though they look tough, this is deceiving and they’re actually sensitive to tears, which compromise their healthful pigments and compounds.

So go ahead and prepare a delicious salad, juice, or soup-all of your major organs will thank you!