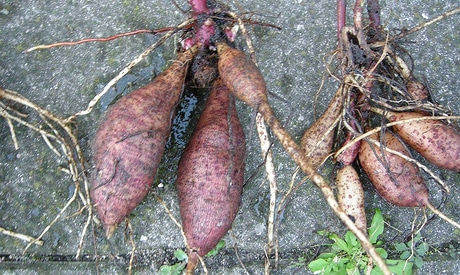 I was pleasantly surprised to discover yacon-pronounced similar to "bacon" but with a short "a"-not only because I am a vegan but also because it is lower in calories than other natural sweeteners. So far, yacon syrup has my attention. How about you? Let's see if there are other interesting facts about this native plant of Peru.

The yacon plant (Smallanthus sonchifolius) is a biological cousin of the sunflower yet has a taste similar to that of jicama and sports tubers that look like sweet potatoes. Yacon is more than a natural sweetener. In fact, native people in South America and increasingly in Europe and North America enjoy the crunch and slightly sweet, apple-like flavor of yacon when it is eaten raw and the pleasant softer texture when baked, steamed, or boiled.

It seems that yacon has a sweet secret; the tubers can contain up to 50 percent of fructooligosaccharide (FOS), which is a type of carbohydrate and dietary fiber called fructans that gives yacon its sweet taste. One advantage of FOS is that people don't metabolize it well. That's a good thing, especially for people who have diabetes, because yacon syrup does not boost blood sugar levels so it's a low glycemic food.

All of these benefits and more are packed into a delicious syrup that has been described as being similar to molasses, honey, and caramel. Yummy!

Yes, yacon syrup is pricey. Non-organic products can run about $12 per eight ounces or nearly twice that amount for organic syrup. However, you need only a small amount to sweeten your oatmeal, tea, granola, or whole-wheat bagel.

So far, few studies have examined the benefits of yacon syrup and other parts of the yacon plant. One recent study appearing in Nutrition Research examined the regular use of yacon and its impact on the immune system in mice. The researchers found that yacon use resulted in a significant reduction in a pro-inflammatory substance (interleukin-1beta) and elevated levels of fecal immunoglobulin A.

In an earlier study (2009), a group of obese, premenopausal women who had slightly elevated cholesterol and triglycerides were given yacon syrup in one of two doses (0.29 grams or 0.14 grams FOS/kilogram/day) over a 120-day period. The recommended intake of yacon syrup was found to be 0.14 g FOS/kg, as this amount did not cause any gastrointestinal side effects.

Use of yacon syrup did result in a significant decline in body weight, body mass index, and waist circumference. Other benefits included a decline in fasting serum insulin levels, an improvement in satiety, and an increase in bowel movements. Yacon syrup did not have an effect on fasting glucose levels or serum lipids.

Overall, yacon syrup seems to offer quite a few benefits for a variety of people, especially anyone who has diabetes or prediabetes. Why not treat yourself to some yacon syrup and see how sweet it is!