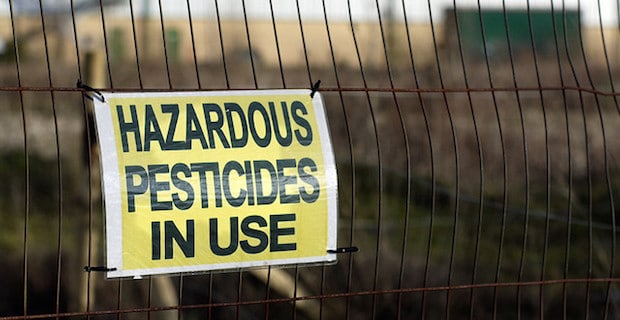 Across rural America many school children are routinely exposed to pesticides. Growing up in the 1970s and 1980s in California's fertile San Joaquin Valley, I was one of those children. My grammar school had vineyards across the street. At one point, the school had to switch to bottled water because the well water tested positive for DBCP, a pesticide banned in 1977 by the EPA, after it was found to cause infertility in male workers exposed to it. Unfortunately, children today are just as exposed to pesticides.

The Pesticide Action Network (PAN) launched a campaign to highlight the impact of pesticides on children. PAN is calling on governments to take action on its "Terrible Twenty" list of pesticides. The campaign comes 20 years after PAN launched the "Dirty Dozen" campaign, which targeted 12 very toxic pesticides for bans or stricter controls on production and use. The campaign comes at an opportune time as pesticides today are used about 50 times more globally than six decades ago. An estimated 1.1 billion pounds of pesticides are used in the U.S. annually, and there are over 20,000 products on the market.

California is the top agricultural producing state in the nation. It's also a state where many children are exposed to pesticides, as a report by Pesticide Reform reveals. In 2010 alone, 170 million pounds of pesticides were applied to crops in the golden state. Over 90 percent of pesticides used in the state are prone to drifting away from their application site. One hundred and forty-four very hazardous pesticides were applied within a quarter-mile from 36 percent of public schools in the state's 15 counties with the highest pesticide use.

Children in the San Joaquin Valley and Central Coast counties are at the greatest risk. The San Joaquin Valley's Fresno County, the top agricultural producing county in the country, had the largest number of schools (131) with very hazardous pesticides applied within a quarter mile. Fresno and Stanislaus counties had the largest number of students potentially exposed to very hazardous pesticides. A type of pesticides called fumigants are used widely in California, including in the Valley. Fumigants are applied at rates up to 400 pounds/acre and account for 20 percent of all pesticides used in California. Fumigants easily drift away from application sites and many can cause cancer, reproductive and developmental harm, plus groundwater contamination and acute poisoning.

Fumigants contribute to smog. The San Joaquin Valley is the top agricultural producing region in the country and it has one of the most polluted air basins. The poor air quality has caused an asthma epidemic in the Valley, plus increases in respiratory and cardiovascular disease. The San Joaquin Valley has the highest level of childhood asthma and California and it is the top health related reason why children miss school in the Valley's biggest counties. Fumigants are the most heavily used pesticides near schools. The top five pesticides used within a quarter mile of California schools studied were all fumigant pesticides. Fumigants easily drift away from application sites and many can cause cancer, reproductive and developmental harm, plus groundwater contamination and acute poisoning.