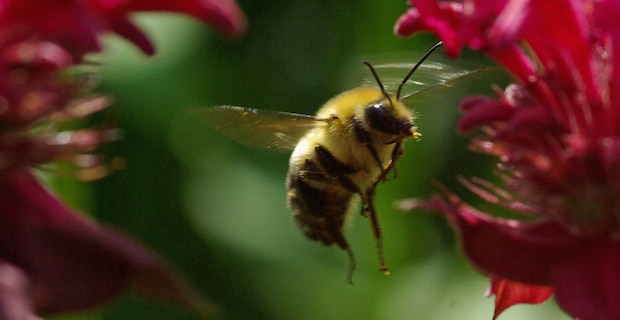 Scientists are coming to the realization that colony collapse disorder is somehow tied to pesticide use–especially the neonicotinoid class of pesticides used on corn, soybeans, cotton, sorghum, sugar beets, apples, cherries, peaches, and so many other crops. They’re even used in lawn care. But what was first speculation is being proven through a number of studies–the most recent of which seemed so simple but was likely the most definitive.

In October 2006, some beekeepers began reporting losses of 30-90 percent of their hives, a condition that has since been defined as colony collapse disorder. It occurs when no honey bees are present in the hive, but the hive still has a queen and no dead bees are found. Varroa mites, a parasite that carries a deadly virus are often found in beehives with colony collapse disorder. A recent study took a look at the connection between this occurrence and the neonicotinoid class of pesticides.

Harvard researcher Chensheng Lu and his team treated 12 colonies with tiny levels of neonicotinoid pesticides. According to the study, “We found honey bee colonies in both control and neonicotinoid-treated groups progressed almost identically, and observed no acute morbidity or mortality in either group until the arrival of winter.”

Here’s where things start to get weird. While the bees survived fine until winter, the bees in six of the 12 treated beehives disappeared in the winter, a common characteristic of colony collapse disorder. The study suggests that the bees may abandon their hives because of impairment of their neurological functioning which impacts their memory, cognition, and other behaviors. The control colonies did not exhibit the same behavior. Previous studies also have shown that when bumble bees are exposed to these pesticides, they have a diminished ability to produce a queen.

Science is making clear that honey bees and pesticides do not go together. And a world without bees means that one-third of the food on our tables would disappear because bees would no longer be pollinating them.