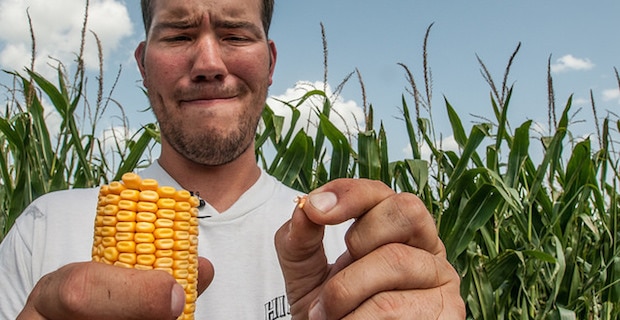 The safety of genetically modified organisms (GMOs) is among the most hotly debated topics surrounding our food supply. Now the results of a new study provide strong evidence that GMO corn and soy may damage vital organs.

Dow, DuPont, Monsanto, and Syngenta claim their GMO corn, soy, and other food crops are safe, and they have clear economic reasons for standing their ground. Fortunately, there are experts who are concerned about the short-term and long-term health and environmental implications of GMOs. One such team recently published their findings of the biological impact of feeding rats GMO corn and soy.

Read about the most common GMO foods

Two groups of rats were involved in the 3-month-long study. One group of 30 was fed a GMO diet consisting of 60% corn and 34% soybeans while the other group was fed a non-GMO diet containing wheat. The nutritional value of both diets was the same and both groups of rats started their diets at weaning. The presence of genetically modified components was verified using a polymerase chain reaction test.

Overall, here’s what the researchers observed when they tested the rats in each group at 30, 60, and 90 days.

Read more about lies about GMOs and GMO labeling

The researchers in this study concluded that their findings “indicate that there are health hazards linked to the ingestion of diets containing genetically modified components.” These findings illustrate some of the clearest evidence to date of the impact of GMOs on health.

[Editor's Note: If you want to eliminate GMOs from your diet for good, click here to sign up for Naturally Savvy's Non-GMO Get Healthy Challenge.]