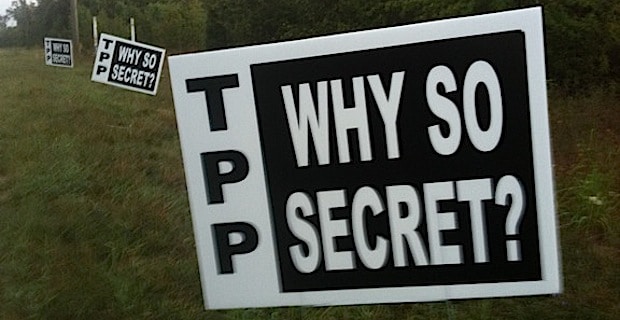 Congress introduced legislation last week to fast track trade agreements, including the Trans-Pacific Partnership (TPP). Senators Orrin Hatch and Ron Wyden introduced the Bipartisan Congressional Trade Priorities and Accountability Act of 2015 into the Senate. Rep. Paul Ryan is expected to introduce a similar bill into the House in the next few weeks, the Washington Post reports.

Although the TPP is being negotiated in secret, not even the Congress knows the details, critics say it could could change our food system in the U.S. Under the TPP, any U.S. food safety rule that is stricter than international standards would be subject to challenge as illegal trade barriers. The U.S. may be required to eliminate those rules.

There are two main ways that the TPP could have negative effects on our food system:

The TPP is being negotiated among the U.S. and 11 other nations (Australia, Brunei Darussalam, Canada, Chile, Japan, Malaysia, Mexico, New Zealand, Peru, Singapore, United States, and Vietnam). It’s the North American Free Trade Agreement (NAFTA) on speed. It includes some of the leading fish and seafood exporting countries in the world, such as Vietnam, Chile and Malaysia. Currently, around one in five shrimp, three in five crabs and three in five catfish consumed in the U.S. come from TPP countries, according to a report by the Center for Food Safety.

The TPP would reduce or eliminate trade barriers on fish imports, increase U.S. seafood imports and put more pressure on the already over-burdened and inadequate federal inspection system. Only about one percent of imported fish and seafood is inspected or tested, an analysis by News21 found. In the last decade, the U.S. imported over 17.6 million tons of seafood. That’s a lot of seafood, and most of it is not being inspected.

Numerous food advocacy groups, farm groups and environmental organizations signed a letter urging Congress to oppose legislation to fast track the TPP. The letter points out that the genetically modified (GMO) labeling laws passed by several states could be “threatened as Technical Barriers to Trade.” A number of U.S. states are considering labeling genetically modified (GMO) foods. Over 70 bills have been introduced in over 30 states to either require GMO labeling or ban GMO foods. Under the TPP, state labeling laws could ban GMO labeling laws in the U.S. The World Trade Organization courts ruled that Country of Origin Labels on meat are unfair trade barriers, a report by the Institute for Agriculture and Trade Policy (IATP) states.

Read more about GMOs and why to avoid them

There is something you can do to let Congress know how you feel about the TPP. Sign the petition by the Center for Food Safety urging Congress to oppose the “fast track” for the TPP.

[Editor's Note: If you want to learn more about GMOs and how to avoid them, click here to sign up for Naturally Savvy’s Non-GMO Get Healthy Challenge.]