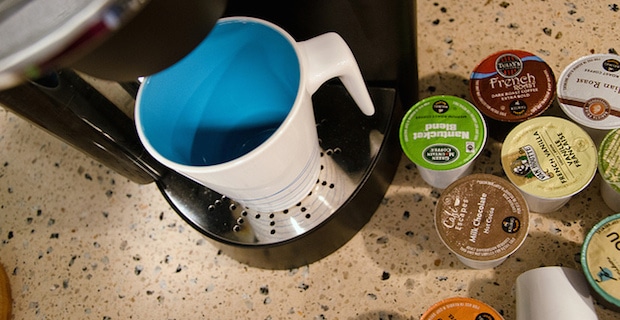 The single brewing coffee maker has changed the face of an at home cup o' Joe. I'll be the first to admit, a cup of Keurig coffee seems somehow more sophisticated. I'm not sure why and I'm not even sure it tastes any different, but for some reason knowing that my cup of coffee was made only for me makes me feel special. And I'm not the only one.

Read more about the health benefits of coffee

Green Mountain Coffee seems, well, green. I know that sounds superficial, but the name makes me picture a lush green mountain growing all sorts of organic caffeinated goodness. But no matter what kind of coffee may be in those little cups, the plastic pods produce a massive amount of waste.

Journalist Murray Carpenter wrote in her book "Caffeinated: How Our Daily Habit Helps, Hurts, and Hooks Us" that a row of the k-cup waste produced in 2013 would circle the planet 11 times. And as green as you might wish Green Mountain is, only 5 percent of those little pods were made out of recycled plastic.

Some competitors already have recyclable or biodegradable versions of this single-serve pod; Nespresso's lid and pod is made entirely from aluminum. A Canadian brand, Canterbury Coffee, makes a version that it says is 92 percent biodegradable (everything save for the nylon filter can break down). Finding a substitute is an interesting challenge, says Keurig spokeswoman Sandy Yusen, because coffee is perishable, and so the material used must prevent light, oxygen, and moisture from degrading the coffee.

"The whole concept of the product is a little bit counter to environmental progress," said Darby Hoover, a senior resource specialist for the Natural Resources Defense Council. "If you are trying to create something that is single use, disposable, and relies on a one-way packaging that can't be recycled, there are inherent problems with that."

Not to mention that it's #7 plastic. While #7 plastic is free of the endocrine disruptor BPA, it does contain polystyrene, which could damage the nervous systems of the workers that come into constant contact with it.

It's all the more reason to think twice before using a single brewing coffee system. Opt for the high quality, yet reusable bliss of a french press.