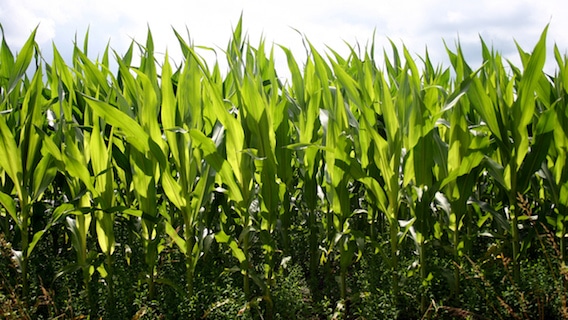 Imagine eating a plate of corn and soybeans every night for the rest of your life. For a change, you might try a bowl of rice a few times a week. With the alarming trend towards monoculture in North America, our food choices could become extremely limited in the future. GMO corn and soy are the top two crops grown in the U.S. today, covering nearly half of the nation's farmlands.

At least 88 percent of corn and 93 percent of soy are genetically modified. The rates of production of these two crops are growing at dizzying paces: 2 million acres of grassland were converted to corn and soy production within the last five years. Why is there such a surge in monoculture and monocropping? What effect is it having on biodiversity?

Monoculture or monocropping is the practice of growing the same crop year after year without rotating through other crops. The crops are all similar in genetic make-up. Fields with genetically modified crops are not only monocrops but are also genetically identical. This means that there is no variety of nutrients to enrich the soil.

The opposite of this is a practice known as biodiversity. Biodiversity refers to the genetic variation in an ecosystem. Each species or genetic component contributes to the richness of soil and the growth of different species. Over time, there is a gradual increase in soil fertility and production. The practice of monoculture can harm biodiversity.

The implications and environmental impact of monoculture

Read more about the implications of pesticide use

The impact of GMOs on biodiversity

Read more about GMOs and the environment

High crop prices and federally subsidized crop insurance plans are a big incentive for farmers in the United States. Financial incentive is offered to those growing the monocrops and participating in monoculture, whereas many of the farmers growing diverse crops and even organic foods are experiencing financial hardships.

If our society continues rewarding monoculture and punishing those growing a healthy variety of foods, where will we be in 20 years? It brings to mind a Native American saying: “When the last tree has been cut down, the last fish caught, the last river poisoned, only then will we realize that one cannot eat money.”