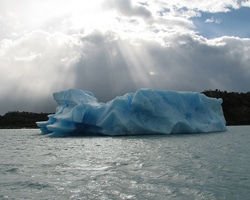 You've probably heard the term "climate change" an awful lot in the last few years, but do you know what it really means? Do you wonder what all the fuss is about? And do you think that maybe it's all just a myth? If you're not really sure, you're not alone. Climate change is a complex issue, but Naturally Savvy is here to break it down for you and make it simple to understand.

What is Climate Change?

According to the U.S. Environmental Protection Agency, climate change is any significant change in temperature, rain or snow, or wind that lasts for an extended period ("decades or longer"), and it can be caused by natural factors or human activity.

But when people talk about "climate change" the focus is on human activity. So what are we doing that's so bad?

The two main culprits of climate change are burning fossil fuels and deforestation, though other human activities are also to blame.

While plants filter the air by "breathing in" carbon dioxide and "breathing out" clean oxygen, deforestation has unfortunately left us with fewer trees, which means less carbon is filtered from the air. And we also know carbon isn't the only problem, so reforestation won't be able to stop global warming.

The Problem with Warming

As the level of greenhouse gasses in our atmosphere rises, the Earth's temperature also rises. According to NASA, the planet's temperature has risen up to 1.4 degrees F in the past century-with a rise of 0.9 degrees F since 1975. By 2100 temperatures could rise another 2.5 to 10.4 degrees F.

This rapid warming would mean warmer surface temperatures in oceans, which would affect marine life, potentially killing species and certainly spreading disease more quickly. On land, animals and plants may see their habitats change dramatically, and many may not survive.

As for humans, warmer temperatures would result in changes in weather patterns, meaning flooding, drought and damaging storms would be on the rise. The melting of polar ice would cause sea levels to rise, affecting low-lying areas and resulting a potential threat to sources of freshwater. Tropical diseases would affect larger areas, and drought and flooding would affect crops.

And if you think this is a problem for future generations, take a look around the world today. In Asia, black carbon particles in the atmosphere absorb sunlight, heating the air and affecting the region's overall air circulation and precipitation patterns. This ultimately results in flooding in southern and China and drought in northern China. Closer to home, scientists are looking at whether global warming has contributed to an increase in Category 4 and 5 hurricanes in recent years.