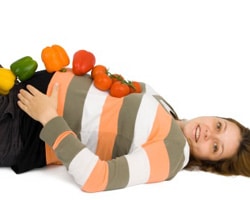 Gaining a healthy amount of weight during pregnancy is necessary to ensure a growing fetus has everything it needs to thrive. The extra weight allows a mother to nourish and protect her unborn baby while it is in the womb. For her own health, as well as her baby's, it is important for a woman to stay within a healthy weight range because gaining too much, or too little, during this period can lead to health risks.

The current recommendation for weight gain during pregnancy is approximately 25 to 35 pounds. This range takes into account pre-pregnancy weight to encourage thinner women to gain more, while heavier women should keep to the lower end of the scale. Obese women are advised to work outside this recommendation and limit weight gain to approximately 15 pounds. A woman's doctor or midwife can help determine which grouping they fall into. Women who are carrying twins are usually encouraged to stay within the 35 to 45 pound range.

A minimum weight gain is established to prevent low birth weight babies. Babies weighing less than 5.5 pounds are considered low birth weight which is associated with neonatal morbidity and mortality, developmental problems, and other illnesses. On the flipside, gaining too much weight can increase the birth weight of a baby leading to such complications as prolonged labor and birth, birth trauma, birth asphyxia, caesarean birth, and increased risk of perinatal mortality. Both mother and baby are more likely to move through pregnancy and childbirth without any serious health problems if the recommended ranges are followed.

The body undergoes many changes to nurture a growing fetus during pregnancy. Weight gain is the result of many factors, including an increase in tissue or fluids. In a typical healthy pregnancy, weight gain is broken down as follows (all numbers are approximate):

During the first trimester many women gain somewhere in the range of two to five pounds. Some underweight women may notice accelerated weight gain during the first trimester. This may be due to the body's innate desire to build fat reserves which are essential for breastfeeding. The second and third trimesters typically see weight increases of about three to four pounds a month.

Healthy weight gain is necessary during pregnancy and should not be discouraged. Alternately, consuming too much food can also be detrimental. It is recommended pregnant women eat a balanced diet of whole foods throughout their pregnancy. They should increase calories by about 150 during the first trimester and approximately 500 extra calories during the second and third trimesters.