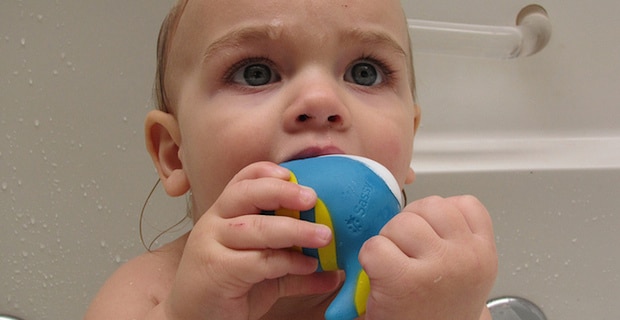 Males exposed to the hormone-disrupting chemicals known as phthalates via their mothers early in pregnancy, may be at greater risk for infertility and low sperm counts. In other words, these nefarious substances found in many plastics, personal care products, and foods may be messing up the next generation of men.

Phthalates have been the subject of numerous research efforts, and the findings have been eye-opening. These pervasive toxins have been associated with or linked to attention deficit/hyperactivity disorder, insulin resistance, obesity, thyroid disorders, infertility, and reproductive disorders. Two new and related studies explored the impact of phthalates on a key pregnancy hormone called human chorionic gonadotropin (hCG).

Read more about phthalates and health problems in teens

The cells that form the placenta manufacture hCG. Levels of hCG are typically detectable in blood 11 days after conception and in urine after about 12 to 14 days. The levels usually double every 72 hours and reach their highest levels by week 11 of pregnancy, after which they decline and plateau for the remainder of the pregnancy.

Why are hCG levels important? Because they can provide information about any chemical exposure to the fetus. In one of the studies, which was presented at the Endocrine Society's 97th annual meeting in San Diego in March 2015, the investigators evaluated data from about 350 women and their babies who had been part of another study. All the women had provided blood and urine samples during the first trimester of pregnancy, and samples also had been collected from their infants.

The researchers discovered higher levels of two molecules produced when phthalates are digested (mono-n-butyl, monobenzyl phthalate) in the urine of the mothers. Levels of these molecules were significantly associated with lower hCG levels in women who had male infants and with higher hCG levels in mothers who had female babies.

According to Jennifer Adibi, MPH, ScD, assistant professor of epidemiology at Pitt Public Health, "There is growing societal concern over pediatric disorders that have a basis in the fetal period and which may be more common in one sex or another, such as autism, attention deficit disorder, obesity, asthma, and infertility. If is important to find out if chemicals in our food or environment might influence these conditions."

Adibi's research was built on a study conducted by Shanna S. Swan, PhD, of the Icahn School of Medicine at Mount Sinai. Swan's work revealed that male children of women who were exposed to phthalates (especially diethylhexylphthalate, DEHP) during their first trimester had a significantly shorter anogenital distance. This study was the largest effort to date on the relationship between anogenital distance and phthalates and included data from 753 infants.

Phthalates can be found in everyday items such as vinyl shower curtains, plastic infant and children's toys, shampoos, carpeting, your car's dashboard, flooring, insect repellent, plastic water bottles, wallpaper, meat and dairy foods, and more. The best pregnant women (and everyone) can do is to reduce their exposure to this toxic chemical as much as possible. Dr. Swan commented that "Because most pregnant women are exposed to phthalates, our findings not only have a profound effect on public health, but on the public policies meant to protect women as well as the general population."