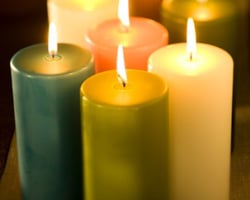 If you’re a candle-lover, chances are you’ve got paraffin candles scattered around your house – and they might just be poisoning the air in your home.

Paraffin is made from the residue left over from the oil refining process. Soot is the by-product of incomplete combustion of carbon fuels and is indicated by a yellow flame. Soot particles are so small-less than one micron-it can penetrate into the narrowest vessels in your lungs, in some cases causing respiratory problems.

The soot from paraffin includes toluene, benzene, methyl ethyl ketone and naphthalene, which can also be found in paints, varnish removers and lacquers-not to mention, the Environmental Protection Agency (EPA) lists benzene and toluene as probable carcinogens.

Soot from candles settle all around your house, usually in cool areas and on electrically-charged surfaces: on baseboards, around air conditioning vents, near refrigerators, on walls, on computer and TV screens and on certain plastics. The oil-based deposits are often mistaken for mould and mildew and are extremely difficult to clean.

There are ways to minimize soot if you decide to stick with paraffin candles: don’t burn candles in drafty areas (they can produce up to 50 percent more soot in a draft); look for thin, braided wicks that curl; unscented candles also produce less soot.

When you’re buying candles, also be on the lookout for candles with metal-based wicks. Many metal wicks – which are used to prevent the wick from flopping over and extinguishing the flame – contain lead, which ultimately ends up in the air and soaked into the surfaces in your home.

In the United States, there is no ban on metal-based wicks. A study conducted by Public Citizen in 2000 found that 30 percent of the 285 candles they tested contained metal wicks, nine of which contained 85 per cent lead by weight. (All candles were purchased from 12 chain stores in the Baltimore/Washington D.C. area.) Metal wicks are banned in Canada, but it’s a good idea to check candles anyway, particularly imports.

How do you avoid these candles? The easiest way is the simplest: look at candles before you buy. Can you see a thin metal wire in the core of the wick? If so, put it back on the shelf (and consider calling or writing to the company about your concerns, because they may not know about the possible health hazards).

Soy candles are becoming increasingly popular and are used in aromatherapy because they can easily be combined with essential oils. They burn 25 to 50 percent longer than paraffin candles, so while they’re generally more expensive, you won’t have to buy as many to get the same burning time.

Soy candles can even hold more scent than paraffin candles, but pay attention to the ingredients: if you see “fragrance” or “perfume” the candle may contain a petroleum-based scent, and you may not want it in your home. For the healthiest soy candles, look for products with natural ingredients, such as organic lavender or bay leaves.

Unscented soy candles are great for formal dinners because they don’t emit any gasses or smells, meaning they won’t compete with the decadent aroma of your gourmet meal.

Beeswax candles are another great alternative because they are a harder wax that can easily be formed into any shape or size. Beeswax candles are all-natural and biodegradable, plus they burn long and clean with a sweet honey smell. Many honey producers also make beeswax candles, and farmers’ markets can be one of the best places to find completely natural candles.

They may cost a bit more in the store, but in the long run soy and beeswax candles offer a healthier, cleaner alternative to paraffin candles.