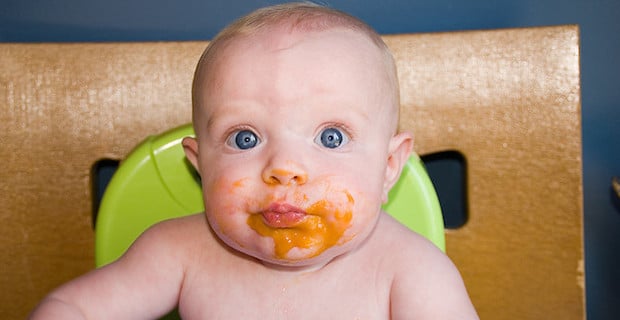 Most parents want to do what's best for their children. Many wonder if they should incorporate organic baby food and products into their diets. Even though the organic market has increased significantly in recent years, many still question whether the difference between organic and conventional foods is really that important for health, and are organic products worth the extra money. The clear answer to these questions is yes! Let's look at some of the main arguments for choosing organic baby food:

Pesticides are poisons sprayed onto crops to kill any pests that may damage or eat the fruit, vegetable or grain in question. We continuously expose ourselves and our children to thousands of different pesticides when we eat conventional foods. Pesticides can lodge themselves in the body's fat cells and remain for long periods of time. They damage the body until they are eliminated. Pesticides are easily passed to a fetus through the placenta, and to an infant through breast milk which is composed of fatty tissue.

Pesticide "safety" guidelines have been established (if that is even a fair statement) only on individual pesticides, not on combinations of pesticides. However, conventional farming and food manufacturing processes leave multiple pesticide residues on most produce and products. The safety of these pesticide combinations has never been studied. The potential negative effect of multiple pesticides could be multiplied. A study, funded by the U.S. Environmental Protection Agency (EPA), determined the consumption of organic foods to be an important way to protect humans from exposure to pesticides (such as organophosphates) which can cause neurological damage. Neurological damage can lead to depression, mental illness, hyperactivity and ADHD, among other issue.

Reduced Exposure to Antibiotics and Hormones

Potential exposure to antibiotics and hormones is the major issue with consuming non-organic meat and dairy products. When animals are raised for food, their living conditions are less than ideal. Consequently, disease can spread quickly if one or more animals become infected. For this reason farmers routinely add antibiotics to the animal's feed, attempting to nip any infection epidemic in the bud. Unfortunately, trace amounts of these antibiotics make their way into the food products we eat and then accumulate in our bodies.

Hormones are routinely given to animals to speed their growth rates allowing them to reach full size much faster than normal. Conventional farmers appreciate this convenience because it reduces farm and feed costs. Unfortunately, as with antibiotics, these residues end up in our bodies and affect our very sensitive endocrine system which governs our own hormonal activity.

When a food is labeled organic it does not contain genetically modified ingredients. By purchasing organic foods you are minimizing your exposure to genetically modified foods, and the health risks associated with their consumption. Despite the claims that Genetically Modified (GM) foods are completely safe, our governments required no long term testing before these foods were approved for use. Genetically modified foods entered our food supply in the mid-1990's. Many studies have linked GM foods to various health issues including allergies, decreased fertility, and digestive problems among other things.

Today more than 70% of processed foods contain at least one genetically modified ingredient. This suggests our exposure to GM ingredients is potentially very high, unless we consciously try to avoid them. The most common GM crops are soy, corn, canola, rice and wheat. In addition, today, most animals are fed GM feed, even if the advertising claims they are "naturally raised". Unfortunately, the effects of these GM ingredients can be passed on to people who eat these animal products.

If you still aren't convinced, consider that organic foods are better for the environment because millions of pounds of chemical fertilizers, herbicides, and pesticides can be diverted from our soil, air and water. These chemicals don't miraculously disappear when used as they do harm to the many ecosystems they come into contact with. In fact studies show organically farmed soil houses many times more microbes, earthworms and fungi. Of course these don't sound appetizing to us, but they are necessary for soil health and increased nutrient content in foods.

We cannot forget we are intricately linked to our environment. When we damage the environment through harmful farming practices, sooner or later we will pay the price with our health.

Read more about chemicals that may lower your child's IQ

When deciding how to spend your organic dollars, it is wise to prioritize the products or foods you feel are the highest risk. Consider purchasing organic varieties of foods that conventionally contain the greatest concentrations of pesticides, antibiotics and hormones. In addition, prioritize foods you eat most frequently, or in the largest amounts.