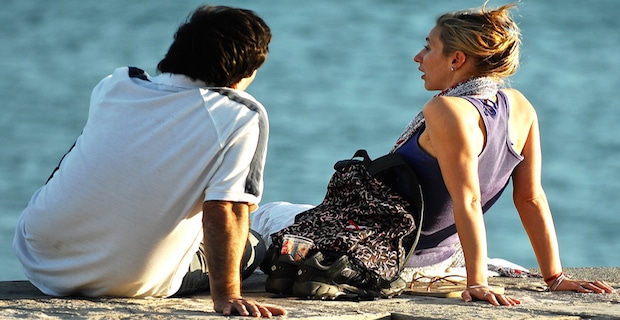 It's been said that people become mean when they're hungry–more agitated, irritable, and more likely to jump down someone's throat. Remember those recent Snickers commercials? While I've never had the urge to scarf down a candy bar when I'm particularly famished, Snickers has a point. When we're hungry, we're not ourselves. A new study published in the National Academy of Sciences proves that low blood sugar levels from hunger can cause more fights among married couples.

The study found that serious discussions between spouses shouldn't take place when you're hungry. Spouses were most unhappy with their mate when their blood sugar was at its lowest point. Glucose in the brain is responsible for self control. Like those times when you know you shouldn't take a dig at your spouse, but you do anyway. When glucose is particularly low, you're the most likely to get into serious arguments.

Read more about stabilizing blood sugar with herbs and spices

"Make sure you don't talk to your spouse about something important when you're hungry because hungry people are often cranky and irritable and angry, and we know that angry people are impulsive. Impulsive people say and do things they later regret," said lead study author Brad Bushman, a professor of communication and psychology at the Ohio State University in Time.

In all, 107 married couples tested their blood sugar levels before breakfast and before bed. Participants were given a voodoo doll that represented their spouses and asked to insert pins into the voodoo doll based on their anger level—quite an interesting testing method.

In the second part of the study, spouses went into a lab where they were told to compete against their spouse to see who could push a button the fastest. The winners could blast their spouse with a loud noise. In reality, they were just playing a computer game.

"Voodoo dolls and loud noises provide novel ways to measure marital aggression. It's a useful approach, because it's not asking couples to describe their interactions – it's a way to actually look at emotional responses," said Janice Kiecolt-Glaser, a professor of psychiatry and psychology at the Ohio State University who studies the health effects of marriage. She was not involved with the new study.