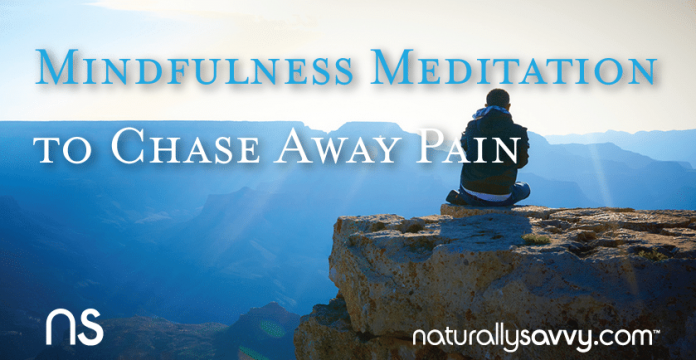 You may be familiar with the phrase "mind over matter," and it is apropos for thefindings of a recent study showing that you can use your mind to chase away pain. The scientists at Wake Forest Baptist Medical Center, who conducted the research, set out to determine whether mindfulness meditation is only a placebo effect. During their efforts they made an unusual and unexpected discovery about pain and mindfulness meditation. One of the findings was that theindividuals in the study who practiced meditation not only reported greater pain relief than did their peers who were in placebo groups. They also had brain scans that showed their brain activity patterns varied a great deal from those of people in the placebo groups.

This discovery "completely surprised" the researchers, because it suggests mindfulness meditation has an ability to reduce pain in a unique way, asdemonstrated by the brain scans. Here's how the experimentworked: Seventy-five healthy adults who were not experiencing chronic pain volunteered for the study. All of them underwent a magnetic resonance imaging (MRI) scan of the brain while experiencing pain-exposure to a 120 degree F thermal probe. The participants rated their physical and emotional response to the pain.

All of the volunteer then were randomly assigned to one of four groups: mindfulness medication, sham medication, a placebo cream, or control.  For four days, the participants in each group either used the placebo cream (rubbed on the back of the leg and tested with a painful thermal probe, which the researchers reduced the temperature on each day so the volunteers thought the cream was effective), sham meditation (participants were told to practice deep breathing for 20 minutes but were given no other instructions), control (listening to a boring book on tape), or specific active mindful meditation instruction for 20 minutes daily. Read more about meditation as the foundation for good health

After the four days, all of the volunteers underwent MRI testing again using the same 120-degree F thermal probe, and this time they were told to utilize what they had used during the four days: the cream, deep breathing, mindfulmeditation, or nothing. They then rated their physical and emotional pain.

Here are the results:

• People in the placebo group reported a reduction in physical pain of an average of 11 percent   and in emotional unpleasantness of 13 percent.

• In the sham mindfulness group, the associated numbers were 9 percent and 24 percent, respectively.

• Among the mindfulness meditation group, the respective numbers were 27 percent and 44 percent.

Read about meditation for physical healing

The authors of the study believe that the take-home message, based on these findings, is that as few as four 20-minute daily sessions of mindfulness meditation could significantly facilitate pain treatment. The experts did note, however, that since they did their experiment with pain-free volunteers, it's not possible at this time to generalize their findings to people who experience chronic pain. Given the numerous other studies showing the benefits of mindfulness meditation on pain as well as eating mindfully, reducing inflammation, and more than a dozen other reasons, it seems like a practice worth incorporating into your life.