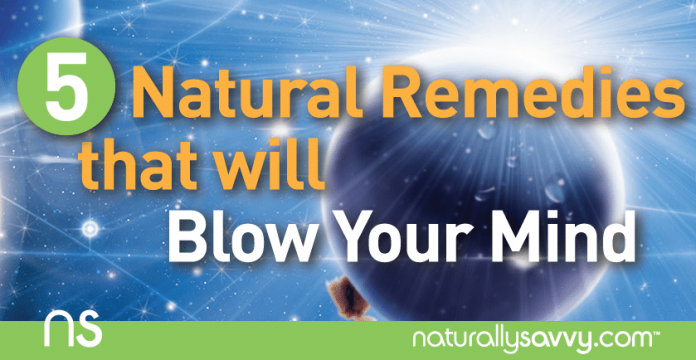 When I was growing up, my mother used to tell me that fish was brain food. That announcement didn't convince me to eat the fish sticks she made every Friday, and now that I've sprouted into a vegan, I'm interested in plant-based foods and natural remedies that can support my brain health.

Despite the vast amount of research on the brain, its functions, and how to preserve its capabilities, there is still much we don't understand. Part of the quest involves learning how natural remedies can support brain health. Here are some of the findings experts have made thus far.

1. Blueberries Can Blow Your Mind

If you had to pick one brain food, it could be blueberries. A U.S. recently noted that the plant components in these little fruits, which include polyphenols called anthocyanins, have an impact that "may protect against age-related deficits in cognitive and motor function." That's pretty high praise for a fruit.

Although much of the brain research involving blueberries has involved animals, there have been some human studies.

One in particular compared the effects of a blueberry beverage to a placebo in older adults  who had some early memory problems. It turned out that people who consumed the blueberry drink improved in certain areas of learning and memory while those who consumed the placebo did not.

What to do: Be sure to include blueberries (fresh or frozen) or blueberry juice (organic) in your diet as much as possible. Suitable substitutes that are also high in anthocyanins are blackberries, cranberries, bilberries, raspberries, and elderberries.

A combination of pyrroloquinoline quinone (PQQ) and coenzyme Q10 (CoQ10) can do your brain good. In fact, I recently reported the results of a study in which the authors said "PQQ was found to improve not only immediate memory, but also other higher brain functions such as spatial awareness."

Since then a brand new study has been published in which the scientists discovered that PQQ seems to protect against certain malfunctions of brain cells and psychiatric disorders.

What to do: PQQ can be taken as a supplement at 10 mg twice daily. Beans, celery, kiwi, potatoes, spinach, and wine harbor this brain remedy as well.

Taking 100 mg of CoQ10 along with PQQ can boost the benefits of the latter.

Phosphatidylserine is a phospholipid, a fatty substance that protects brain cells from damage and also facilitates the transport of signals between them. You need adequate levels of phosphatidylserine to keep your brain and memory functioning at their best.

Use of phosphatidylserine supplements can improve cognitive performance in older adults who are suffering with memory problems, as demonstrated in a recent study published in Clinical Interventions in Aging. The researchers found that 300 mg per day of phosphatidylserine taken for 12 weeks led to a significant improvement in memory recognition, mental flexibility, memory recall, total learning, and immediate recall.

In an earlier study, investigators compared 300 mg per day of phosphatidylserine and a placebo in 78 older adults who had memory problems. At the end of the six-month study, the men and women who had taken the supplement showed significant improvements in memory scores, including verbal recall, which is a memory function that falters during the early stages of dementia.

What to do: A typical dose of soy-based phosphatidylserine is 300 mg daily, although no standard dosage has been established. Higher doses are associated with sleeping difficulties, gas, and stomach upset.

Ginkgo biloba has a long history of use as a memory booster and brain "food," and there are scores of supplements on the market with this idea in mind. However, as scientists began investigating these claims, the results have been mixed.

Since most of the studies have been done in animals, we must rely on some of those results. For example, Ginkgo biloba extract proved beneficial in rats with dementia. The scientists discovered that rats given the herbal extract performed better on learning and memory tasks-and had physical evidence in their brains to support the findings-than did their peers who did not receive the supplement.

We are not rats, however, and fortunately a few studies have been performed in humans. Here are two that provided some promising results.

biloba extract showed evidence that it improved certain brain and memory processes in adults age 60 and older. Another trial involved a 20-year follow-up of more than 3,600 adults aged 65 and older who were mentally stable at the beginning of the study. In this French study, the participants reported using Ginkgo biloba, piracetam (an amino acid type supplement popular in Europe and Asia), or neither of the substances. Overall, people who took Ginkgo biloba had less cognitive decline than those in the other two groups.

What to do: Be sure to buy Ginkgo Biloba supplements from a reputable manufacturer. A standard dose is 80 to 240 mg of the leaf extract daily.

Okay, mother was probably right; so for those who are not averse to fish, I offer research on the merits of fish oil for the brain. The brain loves fat, or should I say the essential omega-3 fatty acids docosahexaenoic acid (DHA) and eicosapentaenoic acid (EPA). According to the authors of a study published in Advances in Nutrition, that love affair is looking pretty positive, enough for them to state that "we are getting closer to providing evidence-based recommendations on fish and fish oil intake to facilitate memory function during old age."

What to do: Until that time comes, they recommend eating fish two to three times a week or taking the equivalent amount of omega-3s (especially DHA). That is equal to about 1,250 mg of DHA and EPA per meal.

The Wonders of Ashwagandha