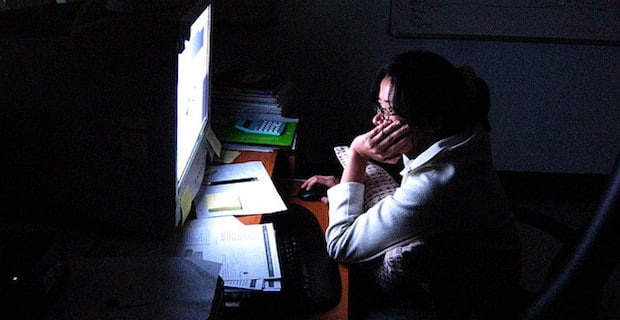 Over the years, I've written frequently about how to sleep better, but for many people their ability to turn in earlier and totally tune out – as in lights out, blinds drawn and electronics off – seems to be declining. Blame demanding jobs where constant connection is virtually required, going to bed with an iPad, or parents who need to hit the computer after the kids are tucked in. Whatever the reason, turning off the screens few hours before bed is becoming the impossible dream.

Problem is, all this exposure to light long after darkness falls messes with our circadian rhythms and interferes with the production and secretion of melatonin, the hormone that helps you sleep, supports immune function and lots more to keep you healthy. And while it may not seem like a big deal, over time all that sleep disruption and missed melatonin can put you at a much higher risk for metabolic syndrome, skin cancer, breast cancer, depression and a host of other health issues, so this is a lot bigger than just being a little tired.

Tablets and smart phones glow bright with blue light which fools our brains into thinking it's still daytime and interferes with the release of sleep-inducing melatonin. So, when you're parked in front of a screen at 10 pm, you're probably going to have a tough time falling asleep an hour later when it's time to turn in. If you're not able to create a regular, electronic sundown, which I strongly advise you do, then at least change the way you deal with blue light. Here are a few ways you can start taming the blue light beast.

Read more about circadian rhythms and your health

Blue light during the day is quite useful, signaling to your body that it's time to be awake, alert and go about your business. By night however, those alertness-triggering effects are considerably less welcome. How to gain the upper hand? Cut your exposure at night. Big sources of blue light? Computer screens, tablet screens, smartphone screens, TV screens and unfortunately, most energy-efficient lighting.

At night the bright blue light of an iPhone or tablet will jack you up, wake your sleepy brain and get those neurons firing at a time when your body needs to be doing exactly the opposite. So the first step is to turn the brightness down as low as possible on all electronic devices after dark. With the brightness turned down, at the very least, you'll be beaming less blue light directly into your eyes, particularly during the dark winter months when we're more likely to spend hours indoors entertaining ourselves with screen-centric activities. Also consider adding blue light blocking screens to your desktop computer and tablet as well. Another way to cut the blue light? Consider switching some of the light bulbs in the house, particularly those in the bedroom, to sleep-supportive, amber or yellow bulbs, which transmit virtually no blue light and simulate a more restful candlelight glow. If you must use a night-light, switch that bulb as well to an amber one.

Remember the old TV ads for blue blocker sunglasses? Well, they're back, albeit in a somewhat more elevated form. The modern versions are designed to prevent the blue light from our ubiquitous screens from pouring into our brains through the sensors in our eyes. If you're a frequent nighttime screen-a-holic, I encourage you to pick up a pair. You can start with a simple pair of glasses or goggles with amber lenses to help cut some of the blue light, or spring for a pair of specially-designed, higher-quality shades from makers like Uvex and Ray-Ban which can block up to 100% of the blue light depending on the style. Will you look slightly ridiculous strolling around the house at night looking like Bono on a bad day? Absolutely, but style notwithstanding, less blue light and better sleep is a worthwhile trade-off.

4. Take a Step Back in Time – With Candles

Who doesn't love the light that candles give off? The glow is warm, inviting, even a little romantic – all pluses in my book. Fire however, is a major concern, particularly when children, animals or even a good bottle of wine are present. The good news is that you don't need to get all fired up. Instead, try incorporating a few battery-operated "flameless" candles into your evening mix. Flameless candles cast a mellow glow that's comparable to the fired version and transmit little blue light, so sleep will come more easily than it would when your home is lit up like an operating room. Place a few flameless candles in the bedroom to create a feeling of blue-light free calm and serenity that will help you downshift more easily at night. And in the bathroom, try using a flameless or two as a night-light.

Read more about candles and how they are not all alike

As with most things these days, of course there's an app for blue-blocking. One of the more popular ones is f.lux, which can be installed on your desktop, tablet and smartphone to help tamp down blue light exposure. It's a pretty clever app that adapts and adjusts the color of your computer's display to the time of day. Another app to take a look at is EasyEyez, which changes your device's color "temperature" and lowers the light to help cut the eyestrain that comes with staring into a smartphone or tablet at night. The lowered light also helps give your body a chance to produce more melatonin, aiding its ability to drift off more easily – so it's a very useful tool.

This article originally appeared on DrFrankLipman.com.

9 Tips To Get Over Jet Lag