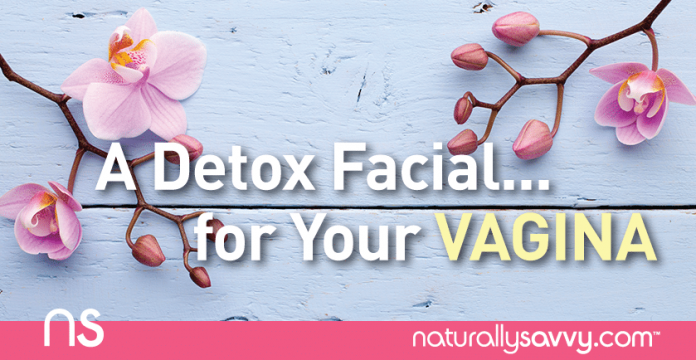 Detoxing your vagina may sound like an odd and even tender torment, but Asian women have been doing it for centuries to regulate their menstrual cycles. This ancient tradition uses a combination of herbs that claim to reduce stress, fight infection, clear hemorrhoids and aid fertility, as well as many other health benefits. Its key components – mugwort and wormwood – have long been used to excite hormones, treat bladder infections, fevers, constipation and induce contractions for the duration of labor.

Yes, the vagina is a self-cleaning organ, but just because you don't have to tend to your lady bits with wacky treatments doesn't mean they wouldn't appreciate a stress-reducing vaginal steam bath.

Many Eastern Asian women commonly steam after their monthly periods. The vaginal steam is a centuries-old technique that's been gaining popularity in holistic practices, physical therapy clinics and spas.

I first heard of the vagina steam bath a few years ago. Like most with a vagina, I was straightaway inquisitive about it. I thought vajazzling was over the top. First there was labia dye, and but now the latest spa treatment, the "Vajacial," a facial for your vagina, is ramping up. It's truly what's up down there.

Salespeople tend to exploit the idea that vaginas are gross and not worthy of discussion. But you've got to love Californians – they're always so ahead of the trends when it comes to things like style. And environmentalism. And vaginal steam baths.

Niki Han Schwarz, owner of Tikkun Holistic Spa in Santa Monica, California told AOL News that she's been offering the herbal "V-Steam" cleanses for several months at her spa, but the origins of "chai-yok" can be traced back to Korea.

"It's been around for 600 years in Korea, but it's new to us in the west. Traditional Korean spas have always offered chai-yok, and Korean women get it done regularly," explained Schwarz.

"All of the herbs in the tea are antifungal and antibacterial. They rid your body of toxins and pesticides, fight infections and even help clear up hemorrhoids. Your body also aches less after you've had a few steams."

Would I be very disturbed by the image of all sorts of horrific toxins emanating from my baby maker, all stimulated by steam, coming out in some sort of nasty cloud? I knew I needed a steaming for my hoo ha before I could answer that question.

The next morning I was sitting on an open-seated stool over a boiling caldron of herbs. In my small room dedicated to the ancient technique, I threw my clothes in the corner, enfolded a blanket around my stomach so that it draped to the ground and created something reminiscent of a gazebo. I then crouched on a low seat that had a hole cut out of the middle, my one-hour rented vagi-stool.

The mist felt neither good nor bad; rather, it felt exactly like what you'd imagine steam on your vagina would feel like. Warm, weird, and cleansing. But I was psyched that I was getting rid of toxins, flushing out my pubic area and cleansing my whole body.

Get a regular chair and a wooden toilet seat. Boil 8 cups of water, add a handful of fresh herbs or 1/4 cup dry ones, and steep for about 10 minutes. If you don't have a vagi-stool, pour half the water into a bowl (leave the rest of the water on the stovetop, covered, so you'll be ready for a second round) and place the bowl in your toilet. Let the water cool for a bit to be sure the steam is warm and not scalding. Tent yourself with a towel or blanket and sit down on the toilet. Stay there for about 10 minutes, until all of the steam has evaporated and you feel your bath is complete. Dump the water; if you still want more, replace it with the hotter stuff from the stove.

Fresh as a flower!