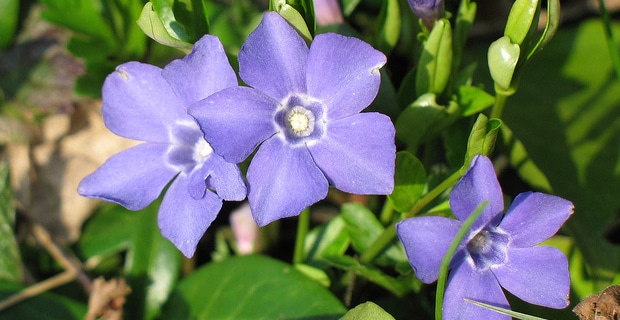 For those of you who are sporting the lovely violet, blue, or pink lesser periwinkle plant (Vinca minor) in your garden, take note. A substance called vinpocetine, which is derived from the seeds of the plant, has been shown to play a role in promoting brain health vinpocetine and memory.

Naturally, that doesn't mean you should be harvesting the seeds to brew up a remedy in your home. But researchers have been investigating the brain-boosting potential of this component since it was first synthesized in the late 1960s. It is popular in Europe and Japan and is gaining recognition in the United States.

The reasons for this rising interest in vinpocetine include the growing number of individuals who are estimated to develop Alzheimer's disease and other forms of dementia and memory loss, and the increasing number of studies showing that the substance has the potential to enhance and improve brain health.

Read about how trans fat robs your memory

Researchers have come to this conclusion after conducting a series of animal and human studies, so let's focus on the latter. In several trials involving stroke patients, experts showed that vinpocetine relaxed blood vessels and increased blood flow in the brain, as seen on positron emission tomography (PET). That's because vinpocetine inhibits the enzyme called phosphodiesterase type 1 (PDE1) while also reducing levels of intracellular calcium. Since PDE1 and calcium can cause contraction and narrowing of the blood vessels, the actions of vinpocetine are most beneficial.

Vinpocetine further contributes to brain health through its antioxidant properties which, along with the inhibition of PDE1, not only promotes blood flow but also may protect the brain and nerve cells from damage should blood flow decline for some reason. The periwinkle derivative seems to help here because it is a sodium channel blocker, which means it can stop the accumulation of sodium in injured nerve cells and also help to restore cognitive functioning.

A recent study of a vinpocetine supplement (Cognitol) explored its impact on memory and concentration in 56 adults who were cognitively impaired. A group of 56 healthy adults were used as controls. Both groups were given 5 mg twice daily of vinpocetine for 12 weeks. The authors found that the patients performed significantly better in memory and concentration after treatment.

The potential for vinpocetine to treat cognitive impairment and brain trauma was also demonstrated in a study of retired NFL players. The study, conducted by Daniel Amen, MD, and colleagues, involved administering a combination of substances (high-potency multiple vitamin, fish oil, ginkgo, vinpocetine, acetylcholine, huperzine A, alpha-lipoic, n-acetylcysteine) for six months. Sophisticated brain imaging showed an increase in blood flow in the brain, while testing of the men revealed significant increases in scores of memory, reasoning, attention, and information processing speed and accuracy.

An analysis of several trials of the supplement for cognitive impairment and dementia revealed that individuals who took 30 to 60 mg daily experienced improvement. However, too few of the patients were treated for longer than six months, so the authors concluded that longer-term studies were necessary to make a better evaluation of vinpocetine.

Read about pyrroloquinoline and memory

Specifically on the Alzheimer's disease front, some laboratory work has indicated that vinpocetine can protect the brain from the damaging proteins called amyloid beta. The periwinkle derivative also blocks certain receptors in the brain that are believed to be involved in the development of Alzheimer's disease, which suggests vinpocetine could help prevent this devastating disease.

Be sure to talk to your healthcare provider before taking vinpocetine and follow his or her dosing instructions. The periwinkle derivative can interact with blood thinners such as aspirin, clopidogrel (Plavix), and warfarin (Coumadin).

– Ogunrin A et al. Effect of vinpocetine (cognitol™) on cognitive performances of a Nigerian population. Annals of Medical and Health Sciences Research 2014 Jul; 4(4): 654-61