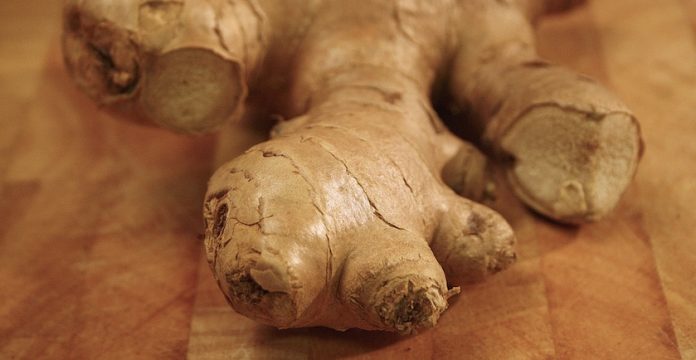 With the arrival of autumn and damper, cooler weather, the incorporation of ginger, a delightfully multi-purpose herb, into everyone's diet is a perfect way to stay healthy during cold and flu season, while simultaneously spicing up numerous dishes.

Though it is rooted in eastern culture (specifically the Middle East, India, and China) because of its perennial persistence and adaptability, ginger (Zingiber officinale) is now available world-wide and can be consumed in a variety of ways. Whether as a capsule, powdered, dried, fresh, pickled, or crystallized, all have their beneficial uses.

The thick root of the ginger plant (known as the rhizome) was once an expensive commodity because of how far it had to travel to get to Europe. Regardless of cost, it remained popular. It has been referenced to as far back as Confucius, and it is present in centuries-old literature from its eastern origins. Now it is grown in many countries, so while it is still quite common to receive it from the east, it can also come from countries such as Fiji, Jamaica, Africa, and even Australia.

Read more about the benefits of ginger and other spices

The creation of "ginger ale" is from nineteenth century England when it was quite common for barkeeps to put ground ginger on tables for people to be able to sprinkle into their beer. It was used to stave off plague and became a staple in homes and taverns, used as regularly as salt.

The most common ginger available in North America is mature ginger, which means it has a tougher skin and needs to be peeled.  Younger ginger is softer, and the exterior is more easily chewed and digested so it does not require peeling. Young ginger is not as common, but can sometimes be found in Asian grocery stores.

It has long been known that ginger has restorative and healing digestive properties. It is reemerging as beneficial even in pharmaceutical products, once again being used therapeutically (as it was so many years ago) and is added to common over-the-counter cold remedies because of its reputation and continued success. Ginger helps to relieve gas and to smooth and relax the intestinal tract. It can help with the secretion of bile and aids in fat digestion.

Most commonly, ginger has been shown to help prevent motion sickness associated with all forms of travel (boat, car, etc.), and it has been shown to be beneficial for many women experiencing nausea during pregnancy. Ginger aids with circulation and warming, and it can be used to induce sweating for relief of fever and illness. It is an anti-inflammatory and antioxidant. Its anti-inflammatory effects are the result of compounds called gingerols which "inhibit the formation of inflammatory cytokines, chemical messengers of the immune system" according to The Encyclopedia of Healing Foods This is one of the reasons it is used for different forms of arthritic ailments such as rheumatoid arthritis and osteoporosis. Fresh ginger is higher in gingerols, so when using it therapeutically, it is best to keep this in mind.

How to Use Ginger

Dried, fresh, cooked or raw, ginger has many uses. It can be grated into salads for some heat or into hot water with some lemon for a sore throat. Thrown into a soup or stir-fry, it adds spice, and mixed with other root vegetables it makes for a wonderful addition to a hearty stew. For a milder taste, the ginger can be added early on in the cooking process, while adding it near the end of a soup or stir-fry keeps it more potent. It's also a great idea to put it into smoothies, not only for healing, but for warmth, comfort, and taste. It goes particularly well with apple, beets, carrots, kale, and celery, with the added benefit of assisting with immunity and liver health.

As a tea, it can either be grated or cut into about an inch-long piece for health effects. Combining it with spices, like cinnamon-which is also anti-bacterial and particularly good for an upset intestinal tract-makes it all the more potent.

Read more about how to make an immunity elixir with ginger