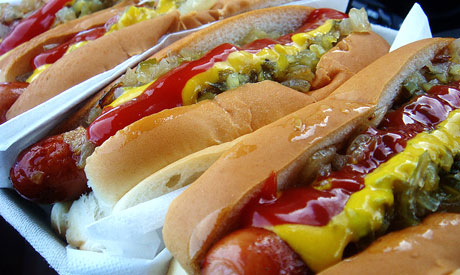 Nothing says red, white, and blue more than grilled meats, cold beer, and legal explosives in the form of firecrackers. But what if hot dogs, an all American July 4th favorite, increased your risk of heart disease by some 42 percent and diabetes by 19 percent? Not to be a Debbie Downer, but the stats don't lie.

"To lower risk of heart attacks and diabetes, people should consider which types of meats they are eating," said Renata Micha of the Harvard School of Public Health. "Processed meats such as bacon, salami, sausages, hot dogs and processed deli meats may be the most important to avoid," Micha said in a statement.

Read more about the dangers of processed meat

Her report, published in the journal Circulation, reviewed 1,600 separate studies to investigate the differences in health risks between processed and unprocessed meats. Processed meats are smoked, cured, salted, or have chemical preservatives added. Examples include hot dogs, salami, sausages, and deli meats. Just 1.8 oz. (about one hot dog) daily drastically increases the risk of heart disease.

Another study, reported on NPR, found that those that eat red meat more than three times per week were 50 percent more likely to develop Type 2 diabetes. Even when researchers accounted for weight gain, the percentage was the same. It's thought that eating too much red meat puts your system into iron overload, which sets the stage for insulin resistance.

And then there are the nitrosamines, also found in hot dogs.

"Our understanding is that, especially [when they occur in] processed meats, these nitrosamines can cause inflammation," explains Dr. David Nathan, who directs the diabetes center at Massachusetts General Hospital.

Nitrosamines can also poison the cells that make insulin (beta cells in the pancreas), creating resistance.

Read more about the dangers of too much sodium

[Editor's Note: If you're looking for a better-for-you hot dog made from 100% real beef, we recommend Applegate. Their hot dogs are made with grass-fed beef, and do not contain antibiotics or growth hormones. Their hot dogs do contain celery powder (which contain naturally-occurring nitrites) but if you're in the mood for a hot dog, this is a cleaner option.]