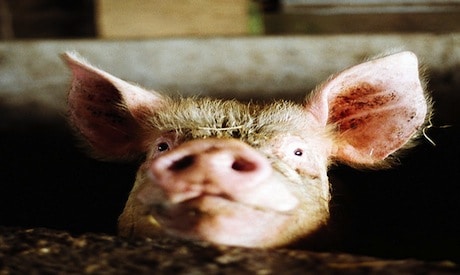 A recent story in TIME magazine highlights a growing issue in our food system: the use of high-end human drugs in livestock animals.

After Chinese chicken farmers were found to be giving the antiviral human drug Tamiflu to chickens in 2005 to treat and prevent the spread of the avian flu (H5N1), it was discovered that chickens could still spread the virus, even if they were not showing any symptoms. Further, the overuse of Tamiflu quickly decreased its effectiveness and the virus soon developed a resistance.

According to TIME, a recent study appearing in the journal Proceedings of the National Academy of Sciences finds that China is still heavily relying on drugs for other reasons as well: "just as happened with the overuse of Tamiflu, China’s animal drug addiction is leading to increasing antibiotic resistance, which in turn could lead to serious problems for people who depend on those drugs to fight infections."

The World Health Organization has already warned that we're at the brink of entering a "post-antibiotic era" as the excessive use in livestock has become common practice. In the U.S. alone, more than 29 million pounds—80 percent of the nation's antibiotic supplies—are being fed to animals to prevent and treat infection. And, like China, the antibiotics are also being used to promote faster animal growth.

Antibiotic-resistant pathogens means more aggressive treatment for diseases; and some of those drugs have much more severe side effects than traditional antibiotics. The WHO said that we could see minor injuries, such as a scraped knee, leading to death because of the inability to treat such superficial infections.

But, "There’s some hope," writes Bryan Walsh for TIME, "last year the FDA issued draft guidelines that would ask the pharmaceutical industry to change labeling and marketing practices so that antibiotics would be used only on sick animals, rather than for growth promotion on healthy ones. But even those guidelines would only be voluntary. In China and in the U.S., drugs are likely to remain a part of commercial meat production — and the rest of us may pay the price."