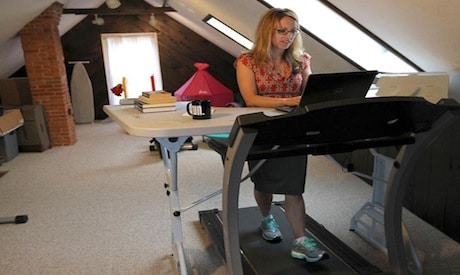 There's nothing like taking a load off in a big comfy chair at the end of the day…but too many of us (present company included!) are spending too much time on our derrières. And it's killing us. Could a standing desk be the answer to our oversitting situation?

First, the facts. According to this viral infographic, sitting has increased by 8 percent between the years 1980 and 2000. Credit the slowing of factory work (at least here in the west) and more desk jobs for that. Sitting for six hours or more each day could increase your risk of dying within 15 years by 40 percent! That's even if you exercise regularly.

Not surprising, obese people sit on average two and half hours more than thin or normal weight people. Between 1980 and 2000, obesity rates in the U.S. have doubled.

When we sit, electrical activity in the leg muscles begins to shut down. We only burn about one calorie per minute when we sit and the enzymes needed to break down fat decrease by 90 percent. We also increase our diabetes risk.

But, according to the New York Times, the answer may be as simple as ergonomics and a return to standing,  "If there is a movement toward ergonomic diversity and upright work in the information age, it will also be a return to the past. Today, the diligent worker tends to be defined as a person who puts in long hours crouched in front of a screen. But in the 19th and early 20th centuries, office workers, like clerks, accountants and managers, mostly stood. Sitting was slacking."

Adjustable desks that allow for standing—some even include treadmills—can mitigate the effects of sitting for hours. And because many are adjustable, they can be easily modified to accommodate sitting as needed.

The Times highlights several companies that make standup desks, including Ergo Desktop and TrekDesk. And they're not necessarily outrageously priced either. Ergo Desktop's models range from $260 to $600 dollars and a TrekDesk is going to cost you about $500. But, compared with the costs of health issues from sitting—or an early death!—the investment certainly seems worth it.