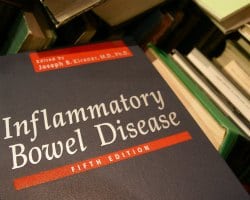 A close relative of mine has recently been diagnosed with Crohn's disease. I sympathize with her because I know it can be a miserable experience. As I started to write this article on Crohn's I was amazed at some of the statistics.

According to the National Institute of Allergy and Infectious Diseases (NIAID), a division of the US Department of Health and Human Services, one in 500 people suffer from Inflammatory Bowel Disease (IBD), the group of diseases that includes Crohn's Disease and Ulcerative Colitis. The National Institute of Diabetes & Digestive & Kidney Diseases (NIDDK) reports similar numbers.

Approximately 544,000 people suffer from IBD in the United States and there are typically three or four new cases per 100,000 people reported annually.

Researchers found that the highest prevalence of IBD worldwide was reported in Canada and Europe, whereas Asia had a lower prevalence of IBD. In developing nations, IBD was a rare occurrence; however, as these nations have become more industrialized, the incidence of IBD has increased.

Gender differences were inconsistent, suggesting that the IBD occurred equally among females and males.

The first thing to do is get a definition of both Crohn's Disease and Ulcerative Colitis.

Crohn's Disease: can affect any part of the gastrointestinal tract, from the mouth to the anus. Inflammation occurs in patches throughout the tract, and the inflammation can affect every layer of affected bowel tissue.

Ulcerative Colitis: affects only the inner layer of the colon (large intestine). It always starts in the rectum and may extend as a continuous inflammation throughout the rest of the colon.

It is likely caused by a combination of factors.

What are the signs and symptoms of Inflammatory Bowel Disease (IBD)?

Since the disease can affect any part of the gastrointestinal tract, people with Crohn's Disease have very diverse symptoms. The most common symptoms are: cramping in the abdomen, diarrhea, loss of appetite and weight loss. Other symptoms may include: fatigue, nausea, vomiting, bloating, canker sores, distinct swelling in the abdomen, perianal disease (disease around the anus), unexplained fevers, sores around the anus, pain or swelling in the joints and anemia.

Some children with Crohn's disease may grow more slowly than their peers, and puberty may start late, but they will eventually catch up. This is likely because they are not absorbing nutrients properly.

Symptoms of colitis will depend upon the type of colitis, but in general, colitis most often is associated with abdominal pain and diarrhea. Other colitis symptoms may include: blood in the bowel movement, the feeling of constantly needing to pass stools even if bowels are empty,constant pain or abdominal pain coming in waves, building to diarrhea, and then waning, fever, chills, and other signs of infection and inflammation depending upon the cause of colitis.

The dietary component for both Crohn's and Colitis is similar:

There are also natural supplements that you can find in your local health food store to help with Crohn's, colitis. Look for a formula which contains a combination of ingredients to help rebuild and repair the intestinal tract as well as help with the cramping, spasming and inflammation. L-Glutamine increases intestinal villous height, stimulates mucosal cell growth in the intestinal tract, and helps to maintain mucosal cell integrity and N-Acetyl-D- Glucosamine is required for tissue repair mechanisms.

Additional ingredients such as cranesbill root will help contract blood vessels thereby stopping internal bleeding and is also helpful for diarrhea and chronic dysentery and herbs such as goldenseal, turmeric and ginger are anti-inflammatory, anti-spasmodic and anti-microbial.

Complementary and Alternative Medicine for Crohn's and Colitis

The National Center for Complementary and Alternative Medicine (NCCAM) defines CAM as a group of diverse medical and healthcare systems, practices, and products that are not presently considered part of conventional medicine. Complementary therapies are intended to be used together with conventional treatment, while the term "alternative" implies replacing the treatment you receive from your doctor with one or more approaches that fall outside mainstream medicine. The Crohn's & Colitis Foundation (CCFA) recommends that anyone considering any of the CAM approaches should discuss them with their doctor, and use CAM as a complement to prescribed medications and not as an alternative to other doctor-recommended treatments for Crohn's and colitis. CAM therapies may work in a variety of ways. They may help to control symptoms and ease pain, enhance feelings of well-being and quality of life, and may possibly boost the immune system.

You can use the following questions as a guide to discuss CAM with your healthcare team:

Caroline Farquhar is a Registered Holistic Nutritionist (RHN) with a degree in Psychology, who also specializes in digestive care and cleansing.