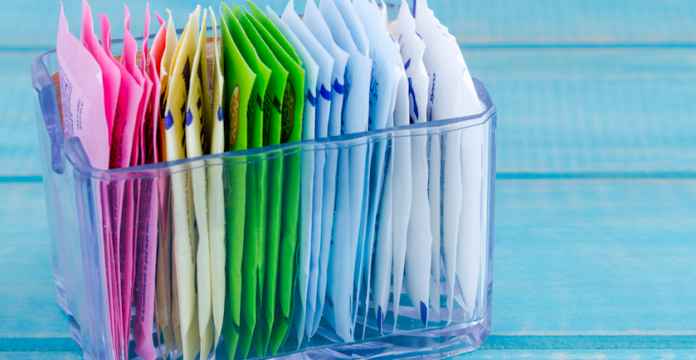 We're all familiar with the little colorful packets of artificial sweeteners and many of us know someone with a Diet Coke-a-day habit. Currently, the Food and Drug Administration (FDA) has approved six of these synthetic sugars: acesulfame potassium (Sweet One), aspartame (Equal), advantame (aspartame and vanillin, no brand name yet), neotame (Newtame), saccharin (Sweet 'N Low), and sucralose (Splenda). Although these artificial sweeteners have a perceived upside-their lack of calories-the downsides far outweigh this benefit. In fact, artificial sweeteners kick your butt and much more.

Read more about how aspartame is made

1. Constant Cravings Artificial sweeteners may play games with your brain and your craving for sweets. A group of University of California, San Diego, researchers looked at how sugar and an artificial sweetener (sucralose, or Splenda) affected how the brain responds to sweetness. Using magnetic resonance imaging (MRI), they found that the brain responded normally to a sugar reward but not to sucralose. They authors indicated that the artificial sweetener "may not fully satisfy a desire for natural caloric sweet ingestion," and thus lead you to crave more and more sweets.

3. Limit Taste Receptors Use of artificial sweeteners can change your ability to taste. According to David Ludwig, MD, an obesity and weight-loss specialist at Harvard-affiliated Boston Children's Hospital, these artificial sweeteners can overstimulate your sugar receptors, which means they "may limit tolerance for more complex tastes," such as natural fruits and vegetables.

5. Weight Gain and Obesity Consumption of artificial sweeteners has been associated with weight gain and obesity. A recent study in the journalNature reported that long-term intake of artificial sweeteners was associated with increased weight, higher levels of blood glucose levels, and a larger waist-to-hip ratio (an indicator of abdominal obesity).

6. Type 2 Diabetes A team of Israeli experts recently reported that use of artificial sweeteners supports and promotes the development of glucose intolerance. This is a major problem, considering the epidemic of type 2 diabetes around the world and the fact that many people who are overweight or obese and who regularly use artificially sweetened beverages and other items may be adding to their risk for type 2 diabetes.

Read more about diabetes symptoms to watch out for

7. Possible Cancer Risk The Food and Drug Administration continues to insist that the artificial sweeteners on the market are not carcinogenic for humans. However, some experts tend to differ. A recent (2014) article in the American Journal of Industrial Medicine reported on the cancer-causing effects of aspartame after review of data on the topic. They concluded there was "consistent evidence of APM's [aspartame's] carcinogenic potential" and in that case, "a re-evaluation of the current position of international regulatory agencies must be considered an urgent matter of public health."

Saccharin remains a highly controversial artificial sweetener when it comes to cancer. Numerous studies showed saccharin to cause ovarian, blood vessel, skin, bladder, and other cancers in animals. Following a proposed ban of the artificial sweetener by the FDA, the US Congress intervened and allowed it to reenter the market.

[Editor's Note: If you want to learn more about artificial sweeteners and how to avoid them, click here to sign up for Naturally Savvy's Artificial Sweeteners Get Healthy Challenge.]

N-A-C: Could this Amino Acid Change Your Life?