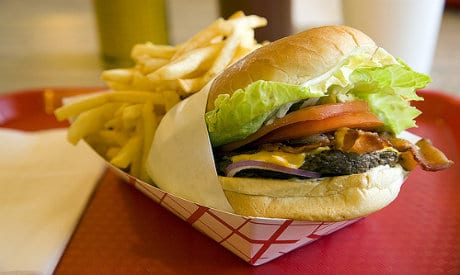 Over the past month, the media has brought us stories of a mother and a schoolteacher who both embarked on journeys to eat only fast food as part of a challenge.

The first, Beautiful Existence-yes, that’s her legal name-ate only items made or offered at Starbucks for an entire year. The Seattle-based mother of two, whom tackles environmentally conscious start-ups on her spare time, claims she took on the Starbucks endeavor as part of a series of year-long challenges she started dreaming up a few years ago. (Think: shop only at Goodwill, try every recreational sport marketed by outdoor equipment retailer REI, etc.) Existence claims she didn’t gain “much” weight thanks to her active lifestyle, and spent more than $7,000 on Starbucks products in the last year. Both Starbucks spokespeople and Existence have pointed out that she was not compensated for her efforts.

Meanwhile, over in the land of Iowa, John Cisna, a high school biology teacher, ate exclusively at McDonald’s for 90 days. The real kicker? He lost 37 pounds and saw his cholesterol drop from 249 to 170. Contrary to Existence’s reasons for pursuing a fast food diet, Cisna did it because he wanted to show people that we can eat “anything” as long as we stick to 2,000 calories a day and adhere to the recommended dietary allowances for nutrients. This one comes with an important back story, however: prior to the Golden Arches challenge, Cisna didn’t watch his weight, count calories, or exercise at all (he added 45 minutes of walking a day into the plan).

These tales of fast food deliverance may all sound a tad familiar.

Remember Jared? In the late nineties, 425-pound Jared Fogle walked into a Subway chain and ordered a 6-inch turkey sub for lunch and a 12-inch veggie sub for dinner, both with a side of baked chips and a diet soda. This order materialized into Jared’s infamous “Subway Diet” for the next 11 months (and years to follow). The act wasn’t an effort to get free grub or press-no, that would come later. Jared was simply trying to lose weight by swapping out his daily dietary regimen of McDonald’s Double Quarter Pounders with cheese, super-sized fries, a few apple pies, 15 to 20 cans of soda, two candy bars, and three to four piled-high plates of noodles and fried meats at his favorite local Chinese buffet, with something a bit healthier.Read more about the Scary Seven Foods to Avoid

Jared lost 245 pounds in the first year, and gained an estimated net worth of $15 million, first-class flying privileges, and a “black card” for free Subway for life.Read: Subway Is Almost As Unhealthy As McDonald’s

Apart from these personal pilgrimages to unleash the powers of fast food, there is no shortage of information surrounding fast-food-strict diets in the bookstore or on the Internet. Dr. Stephen Sinatra wrote a book titled "The Fast Food Diet", followed by best-selling author Dr. Charles Clark’s "The New High Protein Healthy Fast Food Diet" and Dr. Oz’s Fast Food Diet plan.

If you ask me, this is a dangerous recipe we are cooking up.

While the motivations and weight loss results will vary from diet plan to person, I think there’s a bigger issue brewing here: by engaging in these media-hungry challenges, we are sensationalizing fast food and the corporate behemoths behind them. We are supporting companies that can pour millions of dollars into a PR campaign to exploit these individuals and teach teens and parents that it’s “healthy” to consume a fast food rich diet. (In fact, McDonald’s has, of course, already publicly congratulated Mr. Cisna for his weight loss on the fast food diet.)Read more about healthy weight loss

This is recruitment in disguise and an extremely dangerous “challenge” to embark on if we want to reverse the fact that the current generation of youth is destined to be the first in U.S. history to live sicker and die younger than its parents.

The glaring problem with these challenges and physician-backed diets is they spotlight weight loss and the importance of calorie counting. Though obesity has become an American epidemic-nearly 1 in 3 young people are overweight or obese-a diet rich in fast food will impact more than just your figure. It has been linked to chronic health issues, including Type 2 Diabetes, heart disease, cancer, and an increased risk of death. A 2012 study performed by the Canadian Journal of Cardiology found that damage to the arteries occurs almost immediately-that is, after one fast food meal. We can blame it on high amounts of saturated fat, sodium, and little to no nutritional value.

As far as the impact on our society, it is estimated that 78 percent of healthcare expenditures in America are for the treatment of chronic disease. If you put a number to it, we’re looking at an estimated $76.6 billion per year just to treat pediatric diseases like asthma, cancer, and attention deficit hyperactivity disorder (ADHD), according to a paper published in Health Affairs by Dr. Leo Trasande, an associate professor of pediatrics, environmental medicine, and health policy at New York University.

I’m not condemning Jared for his efforts to cut his weight in half (bravo!) or even fast food when you need a convenient bite. However, before you decide that the “Taco Bell Diet” is your chance at a book deal and an easy 15 minutes of fame, think about the message it sends.

Grab that bean burrito if you need to and opt for moderation instead. You’ll be doing your health and the future generation a huge favor.