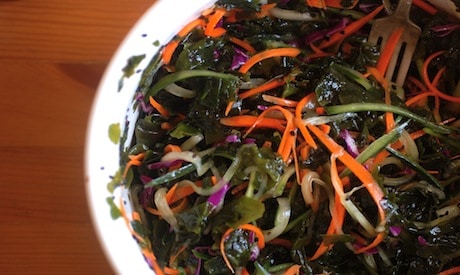 Are you ready to try some healthy food from the sea, but you don't want it to have fins? If you haven't thought much outside the fish bowl, do yourself a favor (and a flavor) and take a sea cruise toward iron-rich seaweed.

If this is your first sail into the world of seaweed, let's take a quick look at why you would even want to eat these algae. Then we'll discuss what's available.

Although the idea of eating seaweed may be less than appealing, just remember that these ocean vegetables are rich in vitamins, minerals, and other nutrients, including the all-important iodine (which I discuss a bit later). This other-world nature of seaweed is accompanied by its own unique taste, which is known as umami. What is umami? Well, it isn't sweet, salty, bitter, sour, or pungent-it's umami! Try it and you'll know. It's that savory flavor in meats (and seaweeds).

The edible types of seaweed are brown, blue-green, green, red, and yellow-green, and each type has its own special nutritional values. So while seaweeds are generally excellent sources of nutrients, the amount of each nutrient differs between these sea veggies.

The most popular seaweeds are arame, Corsican, dulse, hijiki, Irish moss, kelp, kombu, nori (used to make sushi), sea lettuce, and wakame. Which ones are the best sources of certain nutrients?

Read more about the health benefits of seaweed

One source noted that arame and wakame provide ten times the amount of calcium you can get from cow's milk, while sea lettuce has 25 times the amount of iron found in beef! Kelp and wakame offer four times the iron. Nori can pack protein concentrations as high as 50 percent. The amount of vitamins C and K, the B vitamins, folic acid, and manganese also vary widely among the different seaweeds.

And then there's iodine.

An eye on iodine

Iodine is a trace element that is necessary for proper functioning of the thyroid gland and its hormones, thyroxine (T4) and triiodothyronine (T3). Another player is thyrotropin, a thyroid-stimulating hormone (TSH) produced by the pituitary for the purpose of controlling thyroid hormone production and the amount of iodine the thyroid takes in.

If iodine levels are inadequate, thyroid and thyroid hormone functions are disrupted. Since these functions are responsible for protein production, enzyme activities, and metabolism, including the possibility of developing hypothyroidism, hyperthyroidism, or goiter, it's important to maintain a healthy level of iodine in your body.

Some indications of an iodine deficiency include fatigue, high cholesterol, depression, trouble losing weight, and muscle weakness. But iodine deficiency isn't a problem any more, is it? After all, we have iodized salt and experts are always telling us we consume too much salt.

In fact, iodine intake declined about 50 percent between 1971 and 2001. An estimated 74 percent of adults in the United States have an iodine deficiency. Part of the reason is that wheat flour used to be processed using iodine, but that practice has stopped. In addition, the majority of salt used in processed foods does not contain iodine.

Another reason is the fact that not all iodized salt contains enough iodine to help prevent a deficiency. A study from the University of Texas at Arlington found that 47 of 88 samples of iodized salt had insufficient levels. Yet a fourth reason is that substances in the diet, including bromide, chlorine, and fluoride (in the water supply) interfere with the absorption of iodine.

Seaweed is the best food source of iodine, but there are several caveats. One is that you should eat fresh seaweed or seaweed in sheets (like nori). These forms have the highest nutrient levels and are lowest in fat and calories.

You can find a variety of seaweed chips and roasted or toasted seaweed snacks on the market, but their nutrient levels are not the same as those found in fresh seaweed. Some, but not all seaweed snack foods, are high in fat and/or sodium, and there is no iodine information on the package labels.

Another consideration is that the amount of iodine in seaweed varies widely depending on which variety you eat. For example, the Office of Dietary Supplements reports that the amount of iodine in one gram of seaweed can range from 16 micrograms to 2,984 micrograms, which is equivalent to the difference between 11 percent to 1,989 percent of your recommended Daily Value of iodine.

The seaweed powerhouses when it comes to iodine may be arame, kelp, and kombu, which boast up to 500 times more iodine than found in shellfish (depending on the time of year they are harvested) and up to 3,000 times the amount found in ocean fish. The amount of iodine found in any seaweed also depends on the water in which it grew.

The good news is that you don't need to eat a lot of seaweed to get more than an adequate amount of iodine. Once a week, enjoy a few nori rolls (nori has a lower iodine content), add a few tablespoons of chopped brown seaweed (higher in iodine) to soup or salad, or mix several tablespoons of fresh seaweed with chopped veggies in a salad with olive oil and herbs for a healthful snack. Don't go overboard with the seaweed!

Be sure to avoid the bright green seaweed you find in sushi restaurants. You know the stuff. It's day-glo colored and those colors are artificial. You can check out my Asian food investigation for more information on what's in that seaweed salad.