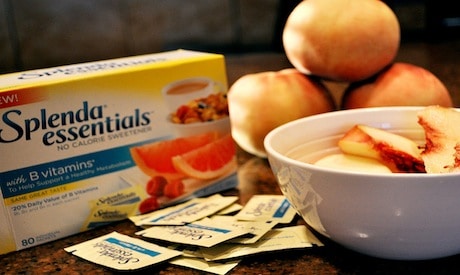 The artificial sweetener called Splenda is marketed as a "delicious alternative to sugar." The main ingredient is sucralose, with glucose and maltodextrin as fillers. Sucralose could affect blood sugar and insulin levels, a new study published in Diabetes Care finds. Researchers at Washington University School of Medicine in St. Louis analyzed the effects of sucralose in 17 obese people who don't have diabetes and don’t regularly use artificial sweeteners. The participants consisted of people with an average body mass index (BMI) of just over 42. A person with a BMI of 30 or higher is considered obese.

The 17 participants were either given water or sucralose to drink before taking a glucose challenge test. The researchers wanted to find out how the combination of sucralose and glucose would affect blood sugar and insulin levels. They tested every participant twice. Participants who drank water followed by glucose in one visit were given sucralose followed by glucose in the next, so that every subject served as their own control group. The researchers found that when participants drank sucralose, their blood sugar levels were at a higher level than when they drank only water before eating glucose. The insulin levels of those who drank sucralose increased by about 20 percent.

The findings from other studies support what the Washington University School of Medicine researchers found. One study found that the gastrointestinal tract and pancreas can detect sweet foods and drinks with receptors that are almost identical to those found in the mouth, causing an increased release of hormones, including insulin. Another study found that the absorption of glucose increases when receptors in the stomach are activated by artificial sweeteners. One study in particular by Duke University researchers found that Splenda contributes to obesity by destroying beneficial intestinal bacteria and possibly interfering with the absorption of prescription drugs.

People who are obese are marketing targets for artificial sweeteners. That's the reason the Washington University School of Medicine researchers wanted to study obese people. "We wanted to study this population because these sweeteners frequently are recommended to them as a way to make their diets healthier by limiting calorie intake," said first author M. Yanina Pepino, PhD, research assistant professor of medicine.

"Our results indicate that this artificial sweetener is not inert – it does have an effect," said Pepino.  "And we need to do more studies to determine whether this observation means long-term use could be harmful."