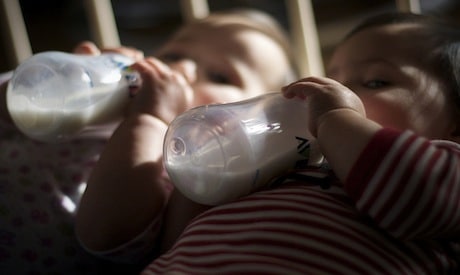 seem to be popular these days, and there is a very good reason why:

they provide many benefits. Those benefits extend to babies, as a recent

(LCPUFA) supplements perform better on standardized tests when they are

older. The study looked at the effects of LCPUFA consumption on

cognitive development. The researcher’s objective was to evaluate

given docosahexaenoic acid (DHA) and arachidonic acid (ARA) as infants,

compared with children not given LCPUFA as infants.

81 children participated in a double-blind, randomized trial of LCPUFA

supplementation. What the researchers found is that although there were

no significant differences observed at 18 months, from three to five

years there were “significant positive results” observed on

rule-learning and inhibition tasks. “The data from this relatively small

trial suggest that, although the effects of LCPUFAs may not always be

effects may emerge later on more specific or fine-grained tasks,” the

Other research shows there are benefits to LCPUFA supplemented formula. A 2007 study

reviewed trials on LCPUFA supplemented formula in infants and found

four months old. However, the researchers concluded that “the studies

could not demonstrate a consistent positive effect beyond that age.”

on the effects of LCPUFA supplementation on infants. Researchers

analyzed the effects of LCPUFA supplemented formula on infants born

prematurely who were given the formula from birth to nine months old.

The researchers followed the children for nine years, and found that the

girls showed “beneficial effects of LCPUFAs on literacy.” They also

found increases in verbal IQ, full-scale IQ, and memory scores for both

genders given the supplemented formula.

that analyzed 19 studies involving 1,949 infants. What they found it

that LCPUFA supplementation had a “significant benefit…on infants

visual acuity.” They concluded that “current evidence suggests that