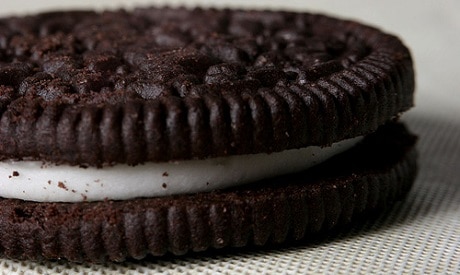 Have you ever joked that you were addicted to Oreo cookies when you couldn’t have just one? Well, it’s no joke. A new study out of Connecticut College found that Oreos are as addictive as cocaine and morphine.

Fox News reports that the study found that when rats ate Oreos they had the same response as when other rats were injected with cocaine or morphine. In addition to the body’s typical reaction to these stimulants, the researchers found that the Oreos actually triggered more neurons in the “pleasure center” of the brain suggesting they may provide an even bigger “fix” than the illicit drugs.  Read more about junk food addiction

Connecticut College Neuroscience Professor Joseph Schroeder said in a press release, “Our research supports the theory that high-fat/ high-sugar foods stimulate the brain in the same way that drugs do. It may explain why some people can’t resist these foods despite the fact that they know they are bad for them.”

The study suggests that beyond Oreos, eating a diet high in sugar and fat may truly be as addictive as a drug addiction. And as we know, these diets can cause obesity which can lead to a long list of health problems including increased risk of cancer, heart disease, and diabetes.

What makes this addiction even more dangerous than drug addiction is that foods high in sugar and fat are readily available and aren’t regulated so people of any age can access them, and as much of them as they want if they have the money. And speaking of money, these foods are typically much less expensive than healthier options which make them all the more accessible by the general public and low-income populations in particular. Read more about the dangers of sugar

Sugar and fat don’t have to be eliminated completely from your diet, but beware that high sugar and fat contents can be found in even the most unassuming places. Check out “Label Lessons” and know the Scary 7 ingredients when you shop to help prevent excess sugar and fat from invading your diet and taking control.