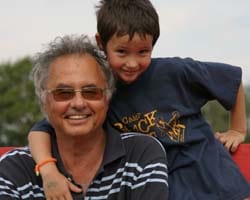 Dr. Zoltan P. Rona is a is a respected medical doctor and has had a private medical practice in Toronto for the past 27 years. He has appeared on radio and TV as well as lectured extensively across The U.S. and Canada. Dr. Rona is one of our well respected bloggers and we are thrilled to be working with him on Naturally Savvy.

His latest book, Vitamin D: The Sunshine Vitamin, is scheduled for release in early 2010.

Naturally Savvy Guide, Andrea Donsky: What is your professional training/education and what are your credentials?

Dr. Zoltan Rona: I have published 10 books throughout my career. The latest ones include:Natural Alternatives to Vaccination

I am a graduate of McGill University Medical School (1977) and have a Masters Degree in Biochemistry and Clinical Nutrition from the University of Bridgeport in Connecticut (1984). I am the author of three bestsellers, The Joy of Health (1991), Return to the Joy of Health (1995) and Childhood Illness and The Allergy Connection (1997). I am a co-author with Jeanne Marie Martin of The Complete Candida Yeast Guidebook (1996) and am the medical editor of the Benjamin Franklin Award winning Encyclopedia of Natural Healing (1998). I have had a private medical practice for the past 27 years, and have appeared on radio and TV as well as lectured extensively in the U.S. and Canada.

Andrea Donsky: What made you become interested in practicing medicine from a natural health standpoint as opposed to the traditional medical route?

Dr. Zoltan Rona: I got into natural health because of my interest in competitive tennis, trying to improve my results with a better diet and nutritional supplements. At one time I was ranked as a junior and still have a modest ranking in the senior category.When I first started practicing medicine as a conventional MD, I quickly realized that most of what I was doing was just patching things up for people so they can go on with their lives. Unfortunately, since virtually nothing in conventional medicine ever treats the cause of the health problem, the patient continues to have the same problems over and over again without resolution. A typical example of this is middle ear infections in children. The standard thing most MDs still do is prescribe rounds of antibiotics (3 or more courses each year). Then, when that runs its course and the child still has one middle ear infection after another, surgery to put tubes in the ears is the next step. Studies now show that this nonsense can all be avoided by eliminating milk and possibly other food allergies. So, I decided that it would be preferable to look for causes rather than just keep patching things up for people. That led me to recommending diet changes and natural remedies. Once I realized that the results for patients were superior, there was no going back to just the drug and surgery approach for me.

Andrea Donsky: How many books have you published and on what? How can somebody pick up a copy if they would like to buy any of them?

Dr. Zoltan Rona: Some of my recent books include:

I am also about to release Vitamin D: The Sunshine Vitamin. All of these books are available from www.Amazon.com.

Andrea Donsky: What advice can you give our visitors about staying healthy (both mind and body)?

Dr. Zoltan Rona: My best advice about staying healthy for both mind and body would be to exercise regularly and to use anti-aging nutritional supplements. A healthy body creates a healthy mind. Follow the nutritional guidelines as detailed in the "Encyclopedia of Natural Healing". Avoid diet extremes and use a far infrared sauna often to detoxify from all the toxins in air, food and water.

Just about every person over age 40 who consults me about natural remedies has been told by one or more doctors that their physical ailments are just because of “aging”. But nothing is offered as either a remedy or a way of preventing these discomforts.

My advice at this time is to err on the side of safety and, with few exceptions, avoid anti-aging drugs and hormones. Stick with safe and well-documented natural remedies only. At this time, my anti-aging recommendations are as follows:

Regardless of your health status, you can feel very confident in using any or all of these natural anti-aging therapies. While not be as dramatic or flashy as the prescription anti-aging drugs and hormones, I can assure you that there is no concern for long term toxicity or side effects. Also, don’t worry about the need to take numerous pills since several national brand supplement manufacturers have combination products that include the list you see here. If you want to slow down or prevent aging, you can start now with the natural remedies I mentioned above.

Andrea Donsky: How do you maintain balance in your life?

Dr. Zoltan Rona: I find exercise to be the most important influence in balancing my life. If it wasn't for tennis, I think I would be much more stressed out. Also, I try to follow my own advice on diet and nutritional supplements.