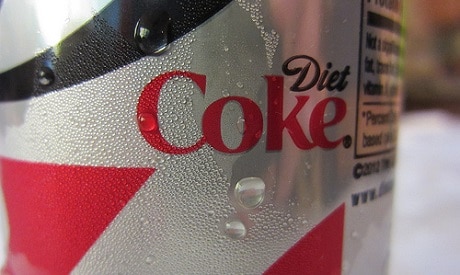 In a conference call with industry analysts, a top Coca-Cola executive admitted last week that they are feeling the pressure from consumers who are reducing their intake of aspartame, the sweetener found in Diet Coke and other diet beverages, as more and more people are questioning its safety, reports USA Today.

Coca-Cola ran a national ad earlier this year standing behind the safety of its sweeteners and saying “The safety of aspartame is supported by more than 200 studies over the last 40 years.”  However, there have been many studies that have linked aspartame to headaches, dizziness, fatigue, vision problems, and many other health issues as well as more serious problems such as multiple sclerosis and some forms of cancer when as little as one diet soda per day was consumed.

Aspartame was introduced to the market by Monsanto, the same folks who have brought us those dangerous GMOs, in the early 1980s. But Coca-Cola and other soda manufacturers aren’t finally looking at alternatives to this controversial ingredient because they believe it is dangerous, but rather because it’s starting to affect their bottom line.

USA Today reports that while sales of regular Coke fell percent last year, the sales of Diet Coke fell three percent. Pepsi reported similar declines with a more than three percent drop in sales for its standard Pepsi cola and more than a six percent drop in sales for Diet Pepsi. While a lot of people are looking to decrease their sugar intake, it appears even more people are trying to steer clear of artificial sweeteners like aspartame.

This is proof that if people use their money to show manufacturers that they care what’s in their food and beverages, the manufacturers will start to listen. Read the labels of what you are buying and avoid The Scary Seven™ ingredients which include aspartame. And beware that when the soda manufacturers do come up with a new artificial sweetener, it will be some time before anyone can sing it’s praises since any tests on long term effects will not have been conducted, and based on the fact that it will still be artificial, it will be best to steer clear of it anyway.

“Consumption of artificial sweetener- and sugar-containing soda and risk of lymphoma and leukemia in men and women.” NCBI. August 2013. http://www.ncbi.nlm.nih.gov/pubmed/23097267

“Aspartame: By Far the Most Dangerous Substance Added to Most Foods Today.” Mercola.com. November 6, 2011. http://articles.mercola.com/sites/articles/archive/2011/11/06/aspartame-most-dangerous-substance-added-to-food.aspx