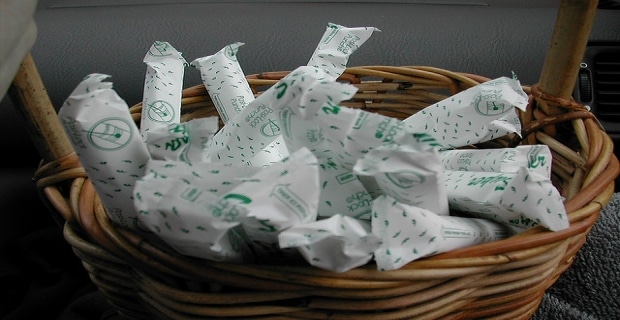 Two years ago, Naturally Savvy asked a third party testing facility to uncover the pesticide residue found in OB tampons. The list of culprits discovered was long and frightening. Now, the results of a new study, the results of which were announced at the recent 3rd National Congress of Doctors for Fumigated Communities, noted that 85 percent of tampons and sanitary products (including brands OB and Kotex) tested showed they contained a key herbicide found in Monsanto’s Roundup.

That ingredient is glyphosate, a substance not listed in our previous study. Glyphosate is the primary substance in Roundup, a broad-spectrum herbicide sprayed on genetically modified crops to kill weeds. It also has been named as probably carcinogenic to humans by the cancer-research segment of the World Health Organization, the International Agency for Research on Cancer.

Read about a tampon experiment

The authors of the new study, conducted by scientists at the Socio-Environmental Interaction Space of the University of La Plata in Argentina, also found that 62 percent of the tampons and sanitary products samples tested were positive for AMPA (aminomethylphosphonic acid), which is a metabolite of glyphosate. In addition, the team tested cotton and sterile cotton gauze and discovered that contamination was 100 percent in these products.

According to Dr. Medardo Avila Vazquez, president of the congress, these findings are “very serious.” He noted that consumers are endangered since “when you use cotton or gauze to heal wounds or for personal hygiene uses, thinking they are sterilized products, and the results show that they are contaminated with a probable carcinogenic substance.”

The glyphosate infiltrates the cotton crop because it is sprayed when the buds are open. This allows the condensed glyphosate to get into the heart of the cotton, where it lies in wait to contaminate unsuspecting consumers. For women who use tampons and sanitary pads, the toxins can infiltrate delicate vaginal and genital mucous membranes.

Don’t think for a moment that just because the study was conducted in Argentina, women in other countries are safe! The majority of tampons imported by Argentina come from Brazil, including brands Kotex and OB.

This new study comes on the heels of an announcement that Monsanto is being hit by a plethora of lawsuits that allege Roundup “caused cancer in farm workers and others exposed to the chemical.” The Environmental Protection Agency, however, decided in 2013 that Roundup is safe and granted Monsanto increased tolerance levels for glyphosate.

Yet some scientists dispute the safety claims. One example is a new international study, published in Environmental Health, in which the scientific team reported that long-term intake of Roundup, even in minute amounts (levels less than allowed in water in the United States) may result in liver and kidney damage.

The study examined the effects of prolonged exposure to Roundup and glyphosate in rats. Even though the study was done in animals, the authors pointed out that because the dose used was “environmentally relevant in terms of human, domesticated animals and wildlife levels of exposure,” the findings potentially could have significant health impacts on people and animals.

In a new review in Food and Chemical Toxicology, a French team reported on the toxic effects of glyphosate-based herbicides, such as Roundup, at levels below regulatory limits. They noted “a coherent body of evidence” showing that this pesticide “could be toxic below the regulatory lowest observed,” including impact on the liver and kidneys, tumor growth, and development of an embryo and fetus.

This latest study from Argentina of the presence of glyphosate in tampons and sanitary pads is yet one more reason why women should use natural alternatives, including organic cotton tampons and pads, the cup, and reusable pads.