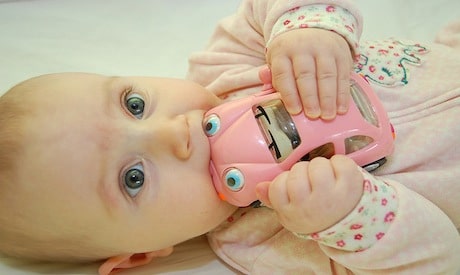 If you haven't heard the news about BPA (bisphenol-A), it's a highly

controversial chemical used in a number of products. It's been banned or

strictly regulated in countries including China, France and Canada.

And, finally, the U.S. has banned it from infant bottles and sippy cups.

But because it isn't a food ingredient and doesn't have to be labeled,

how can you know where it's hiding?

In this respect, BPA is a bit

foods. The only way to know if your foods are GMO-free is to look for

labels that say so. (And some even mislead with that statement as I

discuss in my expose on 'genewashing'.)

The same is true for BPA. Manufacturers that go out of their way to

eliminate BPA often indicate this on packaging. But since the product is

so common, it's likely you're getting exposed to it despite best

efforts to avoid it.

is an endocrine disruptor that mimics human hormones. This causes a

whole bunch of problems in the body including obesity, early onset

puberty, fertility issues, immune problems and even certain types of

Avoid BPA by knowing where it's hiding. Here are five of the most common sources:

This includes canned sodas and beers as well. BPA is used in the can

lining, and highly acidic or oil-based foods are more likely to pull the

chemical out of the liner, but all foods in BPA containers are at risk

of contamination. Avoid canned products or opt for those that are

BPA-free. A good indicator is the #7 recycling imprint on the bottom of

products. Look for alternatives in jars, tetrapaks, or, make your own

you have Tupperware made before March 2010, you might want to consider

replacing it. The company finally switched to BPA-free plastics after 60

years of producing its patented food containers with the chemical.

Tupperware is often handed down from generation to generation, but do

right, your register receipt most likely contains BPA. Those soft

receipts that seem kind of silky? That's BPA, and it's volatile in that

state. If you do need your receipt, have it tossed in your bag and make

sure you touch it as little as possible.

4. Dental work: As if you didn't already hate the dentist enough, the American Dental Association

has this to say about BPA: "BPA might be found in dental composites and

sealants for two reasons: 1) it’s a by-product of other ingredients in

dental composites and sealants that have degraded, and; 2) it’s a trace

material left-over from the manufacture of other ingredients used in

communications from dental material manufacturers, indicates that BPA is

not used as a formula ingredient in dental materials." There are plenty

of reasons to look for a holistic dentist, and you can certainly add

this to the list. Talk with you dentist before major procedures about

the risks of BPA.

5. Children's toys: Plastic is a

go-to choice for children's toys and products because they don't

shatter and can take a bit of abuse. But they're also one of the most

common places to find BPA. Fortunately, like with food, many

manufacturers are now offering BPA-free products. You can also look for

alternatives to plastic altogether such as wood, rubber or fabric.