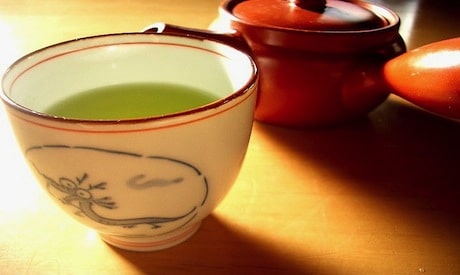 Even in the warmest weather, a cup of tea is most always a welcome and healthy beverage choice, especially when it's green tea, the semi-fermented member of the camellia sinensis plant (black tea is the fully fermented version).

The scientific community (and scores of educated green tea drinkers) already knows that green tea offers us many healthy benefits. According to the website WebMD, research into green tea over the last decade has proven it has an ability to be a weapon in the fights against cancer and heart disease as well as an ability to help lower cholesterol and decrease the risk of stroke. It boosts immune function, can help to maintain a healthy weight and also has applications for the skin—contributing to younger, more elastic skin. And now, new research links green tea consumption with a decreased risk of Alzheimer's and dementia.

According to the study, published in the recent issue of the journal Proceedings of the National Academy of Sciences, green tea may help to block the formation of beta-amyloid plaques, which have been connected with the deadly disease.

A compound in green tea called EGCG (epigallocatechin-3-gallate)—already known as a powerful antioxidant—showed the ability to prevent the plaque formations as well as an ability to break down existing potentially harmful plaque structures.

NutraIngredients.com reports that this research project was the first to use a multidisciplinary approach to studying green tea's effects on Alzheimer's.  "This is the first example of structure-centric, multidisciplinary investigations by three investigators with three different areas of expertise," explained lead researcher Dr. Mi Hee Lim from the University of Michigan.

7 Things You Do Every Day That Increase Dementia Risk