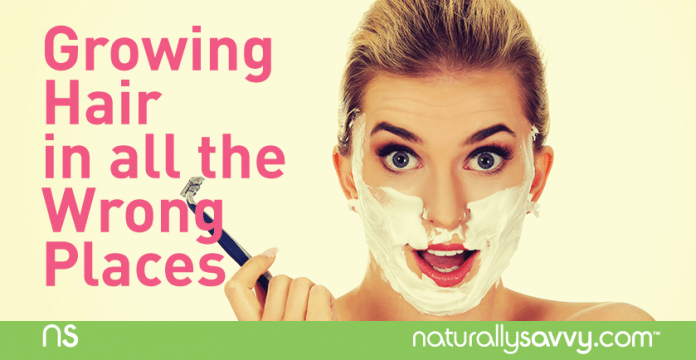 The German theologian Martin Luther said that "Hair is the richest ornament of women." Many women would probably agree with that statement, yet sometimes a woman's hair grows in the wrong places, such as on the upper lip, chin, abdomen, back, and chest. That's when hair can be embarrassing and far from ornamental.

Excess hair that grows in the wrong or undesirable places is known as hirsutism. In North America, 22 percent of women have unwanted facial hair. Causes of unwanted hair growth can fall into one of four categories, which are discussed below, although it's possible for more than one to be involved.

The four categories are: excessive androgens, xenoestrogens, insulin, and rare.

Women usually have low levels of androgens (male hormones), such as testosterone, but if the body produces too much, the result can be unwanted hair growth that are sensitive to male hormones. The tendency to produce greater levels of androgens can run in families, so if you are experiencing unwanted facial or body hair, it's possible your mother and/or grandmother(s) had the same problem. Women who come from South Asian, Mediterranean, or Middle Eastern heritage are more likely to have excess facial or body hair.

Sometimes abnormally high levels of androgens are associated with a condition called polycystic ovarian syndrome (PCOS). Women with PCOS typically have excess facial and body hair, acne (seen in both adolescents and adults), and male-pattern baldness. One cause of PCOS is another factor that can be associated with unwanted hair growth: excess insulin.

Insulin is a hormone produced in the pancreas that facilitates the passage of glucose (sugar) into your cells as a form of energy. If your body resists insulin-a condition known as insulin resistance-then you have trouble using insulin effectively, which then triggers your pancreas to excrete more of the hormone. This results in excess insulin levels, which can cause the ovaries to increase their production of androgens and, you guessed it, the appearance of unwanted facial and body hair.

Food, cosmetics, shampoo, plastics, common household cleaners-these are just some of the places you encounter xenoestrogens, also referred to as endocrine disruptors. Exposure to xenoestrogens has been shown to throw hormones out of balance, and as a result it also can lead to undesirable hair growth in women. As a preventive measure, women should avoid exposure to xenoestrogens as much as possible.

Read More: The 12 Worst Endocrine Disruptors in Your Body

In rare occasions, women can have excess hair growth associated with the following:

Hair, hair, go away! While we would love for unwanted facial and body hair to go away quickly and never come back, it's not always that simple. If you have PCOS or one of the other medical conditions mentioned, seeking medical treatment is important.

Hair removal, whether temporary or permanent, is one way to manage excess hair growth. Another way is to tame the androgen levels. This approach can be especially helpful for women who have PCOS. Here are a few herbal remedies that have anti-androgen properties and may do the trick, although I must mention that scientific proof to support these suggestions is sparse. Discuss your use of these natural remedies with a knowledgeable professional before taking them.

Chaste tree (Vitex agnus castus). In an Australian study from 2014, researchers reported that chaste tree was helpful in improving menstrual regularity in women with PCOS, although its exact impact on androgens is unclear. If you are taking any type of hormone medication or have a history of hormone-sensitive conditions, talk to your doctor before using chaste tree.

Saw palmetto (Serenoa repens). Although this herbal remedy is sometimes suggested as a treatment for PCOS, no studies support this use. Women who take hormone medications, have a history of hormone-sensitive conditions, or who take blood thinners should talk to their doctor before using saw palmetto.

Acupuncture. In a study of 84 women with PCOS, the participants were randomly assigned to receive low-frequency electroacupuncture, physical exercise, or no intervention. After 16 weeks, the researchers discovered that the women who had the electroacupuncture showed a larger decline in androgens than did the women in the exercise group.

Weight loss. Women who are overweight may lower their androgen levels by losing weight through exercise and a healthy diet (i.e., lots of fruits and vegetables, no refined foods, healthy oils, less red meat, no alcohol).

Other Natural Ways to Deal with Excess Hair

Electrolysis. If you choose electrolysis, you can expect to say goodbye forever to those unwanted hairs. That's because electrolysis involved placing a needle into each individual hair follicle and sending an electrical pulse to destroy it. Depending on how much hair needs to be removed, you could need several to dozens of costly treatments. Side effects can include red skin, inflammation, changes in pigmentation, and scarring.

Intense pulsed light. Intense pulsed light (IPL) is similar to laser treatments (see laser treatment below) in that it works best for women with dark hair and light skin. However, IPL is not laser and instead uses a broad spectrum of wavelengths, which makes it less precise and therefore less effective than laser, although it is less expensive as well. You will likely need six or more treatments to see results. Possible side effects include swelling, redness, burning, and scarring.

Laser treatment. Laser hair removal involves the use of light that is aimed at hair follicles and heats the melanin (pigment) in the hair. This causes the follicle to temporarily stop growing hair, so the hair will return. Laser treatment doesn't work if you have red or blonde hair. If you do decide to try laser treatments, you should know that you may need multiple treatments, and there's typically a six to eight week wait between sessions, each of which can be around $235 on average, according to the American Society of Plastic Surgeons. Like electrolysis, there is the risk of inflammation, scarring, and pigment changes.

Plucking. Use of tweezers to remove hairs is typically reserved for eyebrows, hair above the upper lip, and the breasts. It's a temporary solution and in fact can cause hair to grow back even faster. Plucking also can cause ingrown hairs and scarring.

Shaving. This is a quick yet temporary solution. Shaving can be effective for facial and well as body hair. If you are worried that shaving your hair will cause more hair to grow, that's an old wives' tale, although the hair that grows back may look thicker.

Waxing. This temporary technique also may cause hair to grow back faster. Waxing involves putting hot wax on the skin, covering it with strips of paper, and then ripping off the strips. Waxing is often used to remove hair from the bikini line, face, and legs.

WebMD. What to expect during laser hair removal