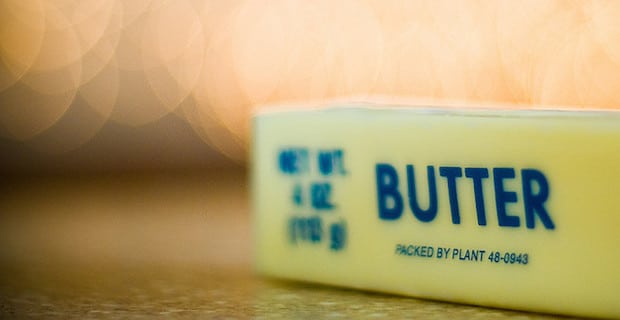 We’ve long denied the benefits of butter. In fact, we were told that animal fats were bad, especially butter, but today, many Americans are slathering it on croissants and even adding it to coffee. "Americans are eating more butter. There's no question about it," says Harry Balzer of the NPD Group, a marketing research firm that tracks Americans' eating habits, reported on NPR.

In the 1990s, only 30 percent of Americans used butter since animal fats were taboo and margarine consumption was high. Animal fats seemed to raise your cholesterol, which in turn lead to heart disease. But research around the subject has evolved, highlighting some of the benefits of butter.

According to Nancy Ferrari of Harvard Health Publications, “The truth is, there never was any good evidence that using margarine instead of butter cut the chances of having a heart attack or developing heart disease. Making the switch was a well-intentioned guess, given that margarine had less saturated fat than butter, but it overlooked the dangers of trans fats.”

Today, trans fats, found in many a tub of margarine, are considered the real culprit, while some animal fats are considered acceptable (though moderation is key). According to the Centers for Disease Control and Prevention, consuming trans fats increases low density lipoprotein (LDL) or bad cholesterol and decreases high density lipoprotein (HDL) or good cholesterol. In fact, just by cutting out trans fats, 10,000-20,000 heart attacks in the U.S. could be prevented.

Trans fats aren’t the only downside to margarine. As more Americans reach for cleaner ingredients, butter is appealing, especially, small local providers. "The increase in butter consumption in America coincides with the decline in margarine consumption," Balzer says.

And what about rumors that American consumption has led to a shortage? Not so fast. While Americans ARE eating more butter, not so much as to cause a shortage. In fact, other countries like Egypt also seem to think that everything is better with butter and as a result, butter exports are up 11 percent.

While butter provides rich flavor that can’t be beat, olive oil is still better for you because it doesn’t impact your cholesterol. Better with butter? Americans seem to think so.

Want to learn about hidden ingredients in your food? Subscribe to our newsletter.

Better for You Foods