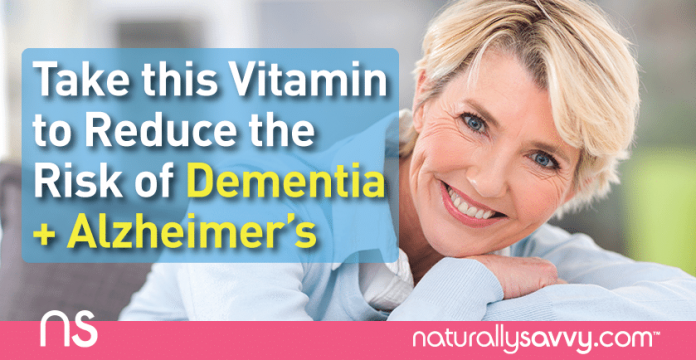 Unless there is a breakthrough in the prevention, treatment, or cure of dementia and Alzheimer's disease, the number of people age 65 and older who will have Alzheimer's disease by 2050 is expected to triple, from 5.1 million today to 13.8 million. While we're waiting for the medical experts to come through for us, there is something you can do to reduce your risk of these life-altering conditions: take vitamin D.

It's estimated that about half the world's population has a deficiency of vitamin D. The relationship between low or deficient vitamin D and Alzheimer's disease/dementia has been studied for years, and the most recent findings strongly support the idea that low levels of vitamin D are associated with a greater risk of developing these neurological diseases. How strong is that relationship? Two recent studies illustrate it.

An international team evaluated data from 1,685 elderly Americans who did not have dementia at the start of the study. The participants were followed for about five years, and at the end of that time, here's what the experts observed:

According to the study's lead author, Dr. David Llewellyn of the University of Exeter Medical School, "the results were surprising-we actually found that the association was twice as strong as we anticipated." However, he cautioned that their findings don't show that low levels of vitamin D cause dementia.

A different international team analyzed data on 1,291 individuals from the US Cardiovascular Health Study (CHS) and 915 participants from the Dutch Longitudinal Aging Study Amsterdam (LASA). All of the subjects were dementia-free at the beginning of the studies and were evaluated using either the Benton Visual Retention Test or Rey's Auditory Verbal Learning Test.

In the CHS study, participants who were moderately and severely deficient in vitamin D demonstrated a greater change in visual memory per year when compared with their peers who had a sufficient amount of the vitamin.

In the LASA group, a moderate and severe deficiency in vitamin D were associated with a nonsignificant change in verbal memory when compared with those who had a sufficient level of vitamin D.

Read more: What we Know About Pesticides and Alzheimer's Disease

Next Steps Reduce the Risk of Dementia and Alzheimer's

The results of these studies should encourage people to pause and consider having their vitamin D levels tested, which involves a simple blood test. Regardless of age, it's never too early to get an adequate amount of vitamin D, since this nutrient is involved in so many critical processes and a lack is associated with serious health conditions, such as cancer, diabetes, multiple sclerosis, tuberculosis, depression, brittle bones, heart disease, and the common cold.

Since few foods (egg yolk, fatty fish, fortified cow's milk) provide a sufficient amount of vitamin D and it would be challenging to eat enough of them to meet most people's needs, the two alternatives are exposure to sunlight and supplementation. This one statement mentions three factors you need to consider:

Although there's much we still do not understand about Alzheimer's disease and dementia, research has uncovered a variety of ways to help reduce the risk, including diet, supplementation, and lifestyle changes. Vitamin D supplements appear to be among those preventive steps.

US News and World Report. Are you getting enough vitamin D? Vitamin D Council