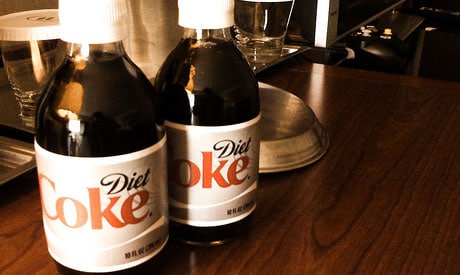 Conventional wisdom has it that chugging down a diet soda with a meal will lead to weight loss. That may not be the case. In fact, regularly drinking diet soft drinks may actually cause weight gain. An article by Dr. Michael Greger, who has appeared on The Dr. Oz Show, finds two main reasons why artificial sweeteners may lead to weight gain.

First on Dr. Greger's list is when someone consumes a diet soft drink with a meal, they may overcompensate for the expected caloric reduction. Several studies on rats back up Dr. Greger's assertions. A 2012 Brazilian study on rats found that saccharin and aspartame caused greater weight gain in rats than sucrose did. A 2008 study by Purdue University researchers on rats found that those given yogurt sweetened with saccharin consumed more calories, gained more weight and put on more body fat. The researchers wrote, "These results suggest that consumption of products containing artificial sweeteners may lead to increased body weight and obesity by interfering with fundamental homeostatic, physiological processes."

Studies on rats are not the only studies that suggest there is a link between weight gain and diet soft drink consumption. In a 2008 study by the University of Texas Health Science Center at San Antonio, researchers analyzed more than 5,000 adult residents of San Antonio for seven to eight years. They found a link between consumption of artificially sweetened beverages and long-term weight gain.

One of the other reasons that Dr. Greger gives for the link between weight gain and diet soft drink consumption is that cravings for sweet tasting food continue if someone consumes artificial sweeteners. As he puts it, "At home maybe you use a harmless sweetener like erythritol-that’s great, but then what if you go on vacation and forget it at home? You still take your preference for severely sweet food with you and that may end up translating into the increased consumption of less than healthy foods."

Researchers from the Washington University School of Medicine found that the gastrointestinal tract and pancreas can detect sweet foods and drinks with receptors that are almost identical to those found in the mouth, and can cause an increased release of hormones, including insulin.

The article published in the Journal of Yale Biology and Medicine suggests that "unsweetening the world’s diet may be the key to reversing the obesity epidemic." That bit of advice could actually help reduce obesity. Instead of reaching for an artificially sweetened soft drink, or even a soft drink sweetened with sugar, reaching for good old water would be a better bet.