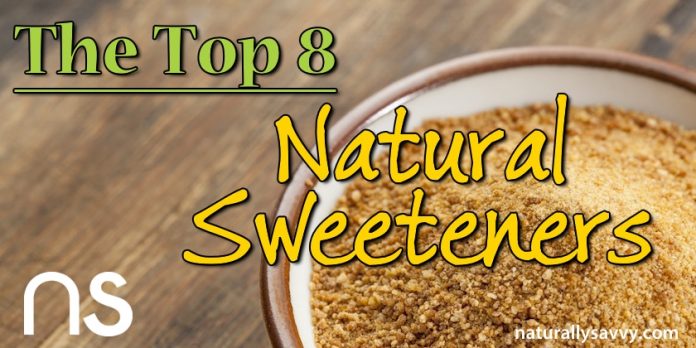 We know that processed sugar is a no-no. It can lead to weight gain and diabetes. It speeds the aging process, suppresses immunity, causes tooth decay, can throw our hormones out of whack and leads to a whole host of other health problems. Still, try telling all that to your sweet tooth when the waiter rolls the dessert cart around. So, if you're looking to curb that sugar problem with healthy sugar alternatives, look no further than these healthy all-natural sweeteners.

The coconut has been experiencing quite a renaissance lately: its oil is no longer considered a "bad fat", coconut water is a hydrating electrolyte alternative to sports drinks, and now, a sugar derived from the coconut palm can give you all the sweet you need with a lot less sugar. Coconut sugar can be used 1:1 in place of regular sugar and is much lower on the Glycemic Index. Find it in powdered form, usually right next to sugar in your local health-minded market.

The leaves of the stevia plant are incredibly sweet—several hundred times sweeter than sugar. But unlike artificial sweeteners, stevia is not genetically modified and won't put you at risk for some unpleasant side effects. Find it in liquid or powder.

Also known as luo hang guo, the monk fruit is 300 times sweeter than sugar, making it easy to use very small amounts, thus reducing calories and sugar levels. Like stevia, it's processed considerably from its natural state, but not nearly as problematic as artificial sweeteners. Look for it in powder form.

The yacon root is a tuber found in South America. It's very sweet but contains indigestible sugars called fructooligosaccharides. They please your tongue all right, but your body doesn't absorb them like regular white sugar, so they're lower in caloric effect and won't spike your blood sugar. Find it as a syrup or the dried fruit slices.

While honey is still a mighty sweet food (but not fit for vegans), it comes in low enough on the Glycemic Index to be considered a slow—and thus safer—release sweetener than sugar. Honey, particularly wild and unprocessed, can also contain an abundance of healthful enzymes and nutrients that have potent healing benefits.

This wood pulp-derived sweetener tastes as sweet as the bad stuff but contains 40 percent less sugar and 75 percent fewer carbohydrates. It's also valued for its healthy effects on the mouth—particularly teeth and gums. Look for it in powder or liquid form.

While it may not sound very appetizing, erythritol is a natural sugar alcohol, usually a by-product of fermentation. It's 60 to 70 percent as sweet as cane or beet sugar but contains nearly no calories. It's only partially absorbed by the body meaning safer blood sugar levels, too. Look for it in powder form.

Of course, one of the healthiest ways to get your sweet-fix is through nature's candy: fruits! Fresh or dried, fruits are full of fiber, which slows the absorption of the sugar for more stable blood sugar levels. Beware of the super hybridized fruits such as grapes, bananas, and seedless citrus—these are sweeter than their natural counterparts (but still a healthy choice compared with candy).